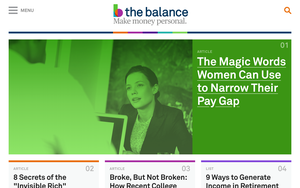 After About.com split up its flagship brand to build topic-specific verticals from its more popular sections, its second vertical, a personal finance site called The Balance, launched this week.

The new site features topics such as investing, money hacks, career advice and small business tips, as well as advice on buying a home and saving for college or retirement.

“Consumers have responded incredibly well to our new products, and advertisers are excited about our combination of data, scale and unique vertical brands,” stated About.com CEO Neil Vogel.

Vogel told Publishers Daily there is an underserved market for personal finance content: “Normal humans that have normal financial concerns. There was a big white space for us,” he said.

Vogel said existing information and sites about finance was “sophisticated,” with lots of industry jargon. But it did not explain in “human terms” how to save for college or what to do with a 401(k).

As a result, Vogel said, the readership of The Balance is 60% women and more than half of its traffic comes from Millennials.

“I don’t believe that Millennials and women need specialized products,” Vogel clarified. “We just think presenting things in a smart and accessible way is going to resonate.”

About.com’s vertical launches are part of its greater “model for the future,” which Vogel referred to in an interview with CNBC in May.

"Our [original] model was created at a time where scale was what mattered in the U.S. What has happened over time is the Internet has involved. The things people trust are verticals,” he said.

About.com plans to launch its tech vertical in the next month or two. It will likely debut its home site around the end of the year.
finance, millennials, web sites
Next story loading