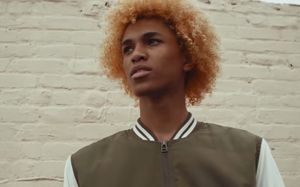 American Eagle Outfitters—one of the few teen retailers that still has a pulse—has just launched a new marketing campaign appealing to kids’ self-expressive nature. And it’s also appealing to Gen Z’s activist streak, with a new line of t-shirts in partnership with Rock The Vote.

The new “We All Can, Can You?”campaign, from Laird + Partners, is aimed at giving these almost-adults the chance to express themselves, with moody black-and-white photography and sturdy individualism, making statements like “I can kiss who I want,” “I can fight dirty,” “I can create my own future,” and “I can dance weird.”

And while the fashion taste of teens and late adolescence has traditionally been shaped by wanting to fit in, Trey Laird, CEO and CCO of Laird + Partners, which created the campaign, is impressed by just how different the tail end of the Millennial generation is. “These young people want to express their own ideas, and put themselves out there in a way that is unique. They’re authentic,” he tells Marketing Daily, “and they want to be part of something bigger.”

The campaign, using the #WeAllCan hashtag, pulls together a collection of models, celebrities and social media influencers, such as Yara (“Black-ish”) Shahidi, model Juana Burga, YouTube star Troye Sivan, and Hailee (“True Grit”) Steinfeld as spokespeople. “We tried to strike a balance between people who are well known as well as people we’re introducing them to,” he says. “This target market is very much about influencers, and recognizing that everyone has a point of view. And they like brands that stand for something. They want to participate with brands, and we felt this campaign, which was unscripted, gives a voice to that. It’s a new step for American Eagle.”

Plans call for the campaign, live now on the company’s digital channels, to start next month in print, social media and out-of-home. It hopes to get young fans to generate content as well, “sharing of positive messages of individuality and freedom of expression across all social platforms through the #WeAllCan hashtag.”

And for the Rock the Vote effort, it’s enlisted Madison (“Cory in the House”) Pettis, who just turned 18, and gets to cast her first ballot in November.

Among retailers, American Eagle Outfitters is among the few not suffering from intense adolescent angst, as they wrestle with Gen Z’s refusal to follow in Gen Y’s fashion footsteps. (The younger group tends to favor bargains, reject logos, and are warier about brands in general.) Recently bankrupt Aeropostale has narrowly escaped liquidation, and Abercrombie & Fitch is struggling with declining sales and an ongoing identity crisis.

But in its most recent quarterly results, American Eagle saw its total revenues climb 3%, its eighth straight quarter of sales gains, as well as a 3% increase in comparable-store sales.