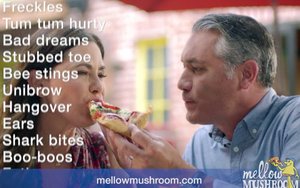 The chain, which has 185 locations in 20 states, is the exclusive presenting sponsor for all 13 of the ACC Network’s Saturday afternoon games.

The signature :30, “Cravings,” asks, “Do you suffer from irritability, boredom, and chronic cravings?,” as a voiceover promises that Mellow Mushroom’s pizzas “are clinically proven to improve your mood and leave you with a full belly” and “fast-acting -- giving you relief when you need it the most…” Meanwhile, a scrolling teletype at the bottom telegraphs disclaimers such as “We didn’t conduct any studies to back up these claims. Not even one.”

The other :30, “ED” (below) features a mature couple flirting, with suggestive music in the background, as they dine at one of the restaurants. The voiceover: “You never know when the moment will strike. And when it does, you want to be ready. Mellow Mushroom’s craft pizza, beer and cocktails can help you enjoy a more satisfying eating experience. Mellow Mushroom is safe for daily use. If you find yourself sitting in a Mellow Mushroom for more than four hours, you may want to go home and come back another day…”

Supplemental online creative from Crossmedia, Philadelphia, such as one that lists the “symptoms” that Mellow Yellow can “cure” (above), will break on YouTube (unskippable preroll), Twitter (weekend and ACC-related exclusively), Facebook and Instagram.
The campaign was driven by media research that found that a large portion of ACC Network viewers were both within Mellow Mushroom’s footprint (its locations are concentrated in the Southeast, but extend west and north to Arizona, Utah, and New Jersey), and unfamiliar with the brand.

“We know from our segmentation studies that college football has a high-interest factor for our guests, and we know that the ACC Network viewer in particular indexes well against our demographic,” Annica Kreider, VP of brand development for Mellow Mushroom parent Home-Grown Industries of Georgia, tells Marketing Daily. In no small part because of the synergistic benefits of the social media sharing factor, “We also love the idea that people watch college football in real time, unlike much of other TV viewing today,” she adds.

“Being part of the ACC Network was just as cost-effective as trying to do a buy on a market by market basis, and it gives us the bonus of not only being able to blanket our current markets but also to introduce our brand to guests in other markets, where we may do business in the future,” Kreider continues. “We also operate in many travel destinations, so guests who learn about us in other areas may come across us on vacation and remember our message.”