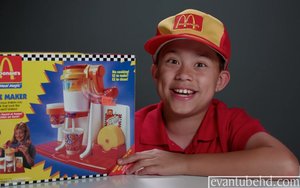 Many of the videos on Evan's three YouTube channels -- including EvanTubeHD -- are actually forms of native advertising, according to the Children's Advertising Review Unit, a self-regulatory group administered by the Better Business Bureau. The organization said in an opinion unveiled on Monday that some of those clips didn't include adequate disclosures.

Evan is among the most successful "influencers" on YouTube. Many of his clips feature him removing toys from boxes and then playing with and reviewing the toys. His channels have garnered more than 3 million followers since 2011, when Evan's father, Jared, first posted a clip of his son. As of last year, Evan's family earned an estimated $1.3 million annually, according to FastCompany.

His family earns revenue through a mix of pre-roll ads and sponsorships from marketers, according to CARU. Some marketers also provide free products to Evan and his family, CARU says.

"After reviewing all the evidence in the record and considering it in light of evolution of the regulatory guidance on this issue, CARU determined that it may not be clear to children that the sponsored videos were advertising," the self-regulatory group wrote in an opinion unveiled Monday.

The disclosures used a wide variety of language and formats, including written statements like "Brought to you by" and "Sponsored by," according to CARU. The watchdog recommended that the disclosures should be standardized, and should be in audio format, given that young children may not be able to read the text versions.

EvanTube said it will run audio disclosures stating that videos are ads at the beginning of sponsored videos, CARU reported.

Last year, 11 advocacy groups including the Center for Digital Democracy, Campaign for Commercial Free Childhood and Consumers Union asked the Federal Trade Commission to investigate "unboxing" videos available through YouTube's app for kids. The advocates argued that the clips were actually “program-length commercials.”

Jeff Chester, executive director of the Center for Digital Democracy, criticized news of CARU's decision. He argues that companies shouldn't use "influencer marketing" when trying to advertise to children 12 and younger, due to children's cognitive and developmental limitations.