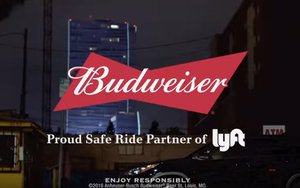 The program is part of Budweiser’s #GiveADamn initiative, which aims to reduce drunk driving fatalities and make U.S. roads safer.

A total of 80,000 rides will be offered through the end of 2016 in specific markets within New York, Colorado, Illinois and Florida that have some of the nation’s worst drunk-driving fatality records.

To use the free-ride service, consumers need to visit Budweiser’s Facebook or Twitter page to obtain a coupon code.

According to the company, Budweiser and all Anheuser-Busch employees participate on each annual Global Beer Responsible Day in community outreach programs that promote responsible alcohol use.

TouchTunes is the largest in-venue, interactive music and entertainment platform, with 38 million unique Millennial viewers monthly, according to the companies. TransitScreen is providing integrated real-time schedules for local trains, subway, buses, taxis, or rideshare options such as Uber or Lyft, which will be displayed on TouchTunes digital jukebox screens.

The real-time schedule information will appear alongside Pernod brand messaging in the TouchTunes jukebox’s video loop.

The TransitScreen content will initially be available on TouchTunes jukeboxes in more than 200 locations in 14 major cities, with plans to expand further.