'Bull' Title Is Truth In Labeling; NBC Says Look In The Mirror 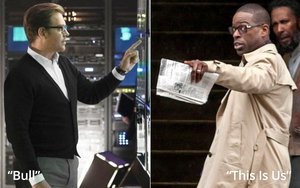 Nothing really binds these two new dramas together thematically other than the fact that they both premiere on Tuesday night, the second day of the new fall TV season.

But it’s also true that their titles -- “Bull” on CBS and “This Is Us” on NBC -- come in for specific attention for unrelated reasons in the reviews of each of them that start right now:

When a show adopts a title such as “This Is Us,” it seems to represent a conceit on the part of the show’s creator that the world he is conjuring is a realistic, mirror image of the group of people he wishes to attract to watch the show. That is a very confident claim to make.

A title like this seems to say: You’ll love this show. It’s all about “us,” by which we mean “you,” our target demographic of people 18-49. Indeed, in the premiere episode of “This Is Us,” a series of storylines -- some interlocking, some not -- revolve around a group of people who are all turning 36 on the same day, an age that is right on the demo target.

So how accurate a reflection of “us” is “This”? The show tries mighty hard to develop characters that its audience can identify with, such as one of them who is an obese woman who struggles with her weight. Before you can say “Mike & Molly,” she meets an obese man and the two fall in love (or so it seems).

Other characters include a couple (played by Milo Ventimiglia and Mandy Moore) who are expecting triplets at any moment. Their ob-gyn (played by Gerald McRaney) is 72, exactly twice as old as the 36 year-olds in this show. This show’s arithmetical symmetry may or may not be important. Watch closely for a twist late in the first episode that you will never see coming.

By contrast, don’t watch this show’s opening scene too closely because the show’s very first image is of Milo Ventimiglia’s naked butt, which none of “Us” needs to see.

Certainly, the application of such a headline requires that the show actually fulfill its potential as a bunch of “Bull.” Fortunately, this farfetched new CBS series about a bombastic psychologist who hires himself out as a consultant to expensive defense lawyers does just that.

The guy’s name is Jason Bull (played by Michael Weatherly, pictured above left) and he is an expert in human behavior. Using his keen intuition about people -- a talent more refined than anyone else’s on the planet Earth apparently -- Bull devises defense strategies that begin with the composition of juries. He knows people so well that he can tell when a jury will be predisposed toward an acquittal. Please note that the basis for this character is Dr. Phil McGraw and his real-life adventures as a psychologist/consultant in the 1990s. ’Nuff said.

This wouldn’t be a CBS procedural if it didn’t have a colorful team of support personnel all working behind the scenes for the benefit of Bull. These include a gay wardrobe consultant named “Chunk.” Yes, Chunk. I have no idea how this name was ever created. Perhaps Chunky candy bars are one of the show’s sponsors. Are there still Chunky candy bars? So many questions …

There’s also the requisite hipster-Millennial computer whiz, in this case a young woman who wears a knit woolen cap indoors whether it’s cold or not. Where Dr. Bull is the greatest intuitist of all time (is “intuitist” a word?), she’s the fleetest-fingered, Internet-searchingest gal who ever Googled a gigabyte -- after the whizzes on CBS’s’ “Scorpion,” that is.

In the premiere episode, Dr. Bull and his team are hired by an obnoxious rich guy and his lawyers to try and get his teenage son acquitted on a murder charge. Can Dr. Bull put a jury together that will win the case? Far be it from me to spoil the first episode of “Bull,” but what do you think?