Smell That? It's Clinton And Trump Going Nose To Nose 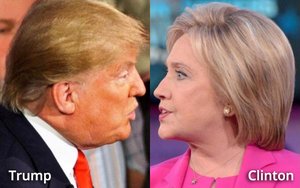 Deep cultural divisions, hatred for the two candidates and the anticipation of a smash-up are all adding up to one thing: The potential for record-breaking ratings for Monday’s first presidential debate.

Nobody is watching this because they love Donald Trump or Hillary Clinton. The electorate dislikes both of them in record numbers, according to a plethora of news stories and op-ed pieces citing various opinion polls.

The opposite is true when it comes to what they each stand for. Millions might find their personalities repugnant, but their supporters are foursquare behind them on the major themes of their campaigns -- Trump’s promise to curtail immigration by Muslims and Mexicans, for example, and Clinton’s plan to guarantee every American a lifetime of government payouts -- for college educations, health care or whatever else her voters want.

The candidates and their constituencies are polar opposites. That’s a recipe for a confrontational debate. And if you believe what the candidates have been saying about each other on the campaign trail, then there’s almost no reason to expect Monday night’s debate to be civil. In fact, an uncivil war is what everyone is hoping for -- from the audience to the TV networks.

While there are no commercial availabilities during the debates, there is plenty of debate-related inventory to sell adjacent to them -- both before and afterward. For the cable news networks in particular, these debates are much more than the sum of their 90-minute length. The buildup before and the analysis after drones on for days and days. The cable networks need these debates to catch fire and remain ablaze through the last of them on Oct. 19 and beyond.

This is no one-off clash. There are a total of three presidential debates (the others are scheduled for Oct. 9 and 19) plus a vice presidential debate (Oct. 4). So the networks want nothing more than a first one filled with insults, barbs and other fireworks that will set the stage and stimulate audience growth for the ones that follow.

They’re already treating this debate like the second coming of Ali-Frazier. They’ve been talking about this first debate for days, if not weeks, and numerous channels put up those inane debate “countdown clocks” on their screens days ago.

Ever since the primaries, the news networks have been promoting all the debates like they are grudge matches between World Wrestling stars or faceoffs of monster trucks. In between the breathless promo spots, they trot out their anchors and pundits to talk about them in hushed, serious tones that are out of sync with the promotional buildup going on around them.

The networks want it both ways: They want to fan the flames in order to stir up the greatest possible interest and viewership. And then they want you to believe they’re serious about reporting and interpreting these events, as if anyone is taking them seriously.

And that’s really the crux of the conversation, isn’t it? Many of us agree that this presidential campaign stinks to high heaven, and both candidates have done their fair share of insulting our intelligence. We know it’s a circus, most of us dislike both of them, and we’re appalled that this is what it has come to.

Maybe it makes us all look like masochists, but despite our suffering with these two, there’s also no way most of us would miss this debate -- especially since everyone we know will be talking about little else the next morning.

The first presidential debate is scheduled to air live from 9 p.m. to 10:30 p.m. Eastern on Monday (Sept. 26) on multiple networks.

politics, tv
1 comment about "Smell That? It's Clinton And Trump Going Nose To Nose".
Check to receive email when comments are posted.
Next story loading