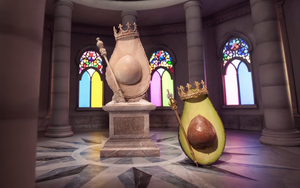 The campaign’s stop-action video series is set in a fairy tale-like palace where the staff of Chipotle lives to pamper, prepare and serve entitled-acting vegetables and other ingredients.

The 60-second anthem video (below) — taglined “Tis their world. We just cook in it” — establishes the premise that ingredients quite literally rule in this world. Three 15-second variations each focus on a single ingredient: Hass avocados, pinto beans and jalapeños.

All of the videos are viewable on Chipotle’s YouTube channel. The brand also did a YouTube masthead takeover for the launch.

The videos are being featured on social media and in movie theaters around the country, as well as run as digital ads. Chipotle says it is also considering running them as TV spots.

Using a “very short list of ingredients” allows Chipotle “to obsess over each one to ensure that our food is absolutely delicious,” said Mark Crumpacker, the company’s chief creative and development officer. “This campaign takes a playful look at how all that attention has inflated the egos of our ingredients.”

Crumpacker was reinstated by Chipotle this month, following administrative leave after a June indictment in New York City for alleged cocaine purchases. He will face a court hearing later this month.