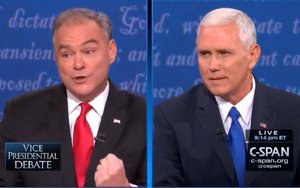 Who won the vice presidential debate?

The answer depends on what criteria you feel like applying. I happen to think Mike Pence won, based generally on the way he came across on TV compared to his opponent, Democrat Tim Kaine. Why? Because on TV, Kaine’s behavior was rude, intolerant and disruptive, and his demeanor was smug. What did the Pakistani taxi driver say on “Seinfeld”? I believe it was “smugness is not a good quality.” And he was right.

Based on Kaine’s performance Monday night, and Hillary Clinton’s first debate last week with Donald Trump, you might come to the conclusion that the Democratic debate strategy consists of ridiculing their opponents, repeating certain messages over and over again regardless of context (or a moderator’s questions), and smiling idiotically through most of it -- whether or not the moment calls for such a carefree, lighthearted facial expression.

By contrast, Pence came across as serious, calm, thoughtful and unflappable. And let’s face it: He had the tougher job -- defending Trump.

Kaine challenged him repeatedly (and smugly) on the many controversial utterances that have emanated from the Republican presidential nominee ever since he announced his candidacy in June 2015. Incredibly, Pence parried just about every one of them and in the process, managed to stick up for Trump and also maintain his own integrity -- which was no mean feat.

Although Trump is an easier target than Clinton, Pence’s attacks on the Democratic presidential nominee, in which he focused frequently on questions about her effectiveness as Secretary of State, scored points for the Republican side.

In reply, Kaine’s assertions that the Iran nuclear deal, for example, represents the world’s best chance for peace in the Middle East rang hollow. It’s the kind of statement a politician makes that causes ordinary people watching at home to scratch their heads in wonder at the bottomless capacity of politicians to frame situations in any way they please, as long as it serves the politicians’ interests.

Pence also repeatedly accused Kaine and Clinton of running a smear campaign based largely on attack advertising and insults. This may or may not be true, but Pence’s strategy here, combined with the demeanor he adopted on TV, was effective enough to paint the Democrats as taking a lower road in the campaign than the Republicans -- another feat that was not easy to accomplish.

In giving Pence a victory in Tuesday night’s debate, let it also be said that this 90-minute face-off was in many ways a tiresome affair. Sitting through it was a tough slog.

There is something off-putting about watching two people greet each other cordially, state that they each respect the other, and then proceed to tear into each other for an hour-and-a-half. In this regard, Kaine was the more off-putting of the two. He interrupted Pence more or less constantly, starting very early in the debate.

If someone did this to you in real-life in, say, a business meeting or over the dinner table, you would think this person was the world’s biggest jerk. Based on the way he acted in last night’s debate, there’s no reason why one shouldn’t think the same of Kaine.

Why couldn't he have kept his mouth shut while his opponent spoke, no matter how much he disagreed with him? Instead, Kaine tried over and over again to ride roughshod over Pence -- in much the same way perhaps that opposing viewpoints get shouted down these days on college campuses.

The debate’s moderator, Elaine Quijado of CBS News, tried her best to control the debaters when they evaded questions, went long or interrupted each other. And she did better than Lester Holt did last week with Trump and Clinton, probably because the presidential candidates are more difficult to rein in than their vice presidential running mates.

Moderating these televised debates is really a thankless job anyway. It’s like being named host of the Academy Awards. It’s great exposure, but it is always followed by an avalanche of post-show criticism (or these days, in-show criticism via Twitter). There is almost no way a debate moderator can avoid it.

Nor can a moderator do much about it when a debate participant decides beforehand that his strategy will consist of interrupting his opponent’s statements as often as possible, as Kaine did in this debate. That showed disrespect for Pence, the moderator and viewers watching at home -- a disrespect trifecta for the Democratic nominee for vice president.