Like Mount Everest, A TV Columnist Covers Politics Because It's There 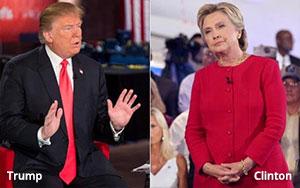 Here at the world headquarters of the TV Blog, we are nothing if not sensitive to the concerns of our readers.

That is why I would like to take this opportunity to talk about the confluence of politics and television, and why a TV columnist chooses occasionally to position himself at the center of that intersection, despite the threat of oncoming traffic.

Earlier this week, some of that traffic took the form of comments from readers who felt the TV Blog had no business opining on this week’s vice presidential debate and, by extension, politics in general.

In response to Wednesday morning’s TV Blog that gave a “victory” to Republican Mike Pence in his debate Tuesday night with Democrat Tim Kaine, one reader complained that the column was “biased.”

I am not sure what the commenter meant by that, but if he was applying the word “biased” as a synonym for opinionated, then I won’t deny it. While I always try to be fair in assessing TV shows and political candidates when they appear on TV, the TV Blog happens to be an opinion column. It is supposed to have a distinctive “voice” and a point of view. It is not designed to be objective like a piece of news reportage.

Another reader who was also unhappy about the TV Blog’s choice of Pence over Kaine -- based mainly on the opinion expressed here that Kaine was obnoxious and Pence wasn’t -- urged me to stay out of the political realm altogether. That is not possible, however, as long as TV and politics remain intertwined.

It’s pretty simple. A TV columnist chooses to write about political events such as debates and conventions for one basic reason: They are on TV.

That makes them fair game, just like anything else that’s on the tube. Thanks to the wide breadth of subject matter and the great variety of program forms on television, a TV columnist finds himself with an embarrassment of riches when it comes to picking daily column topics.

For the better part of 2016 and a good deal of last year too, debates and conventions have been obvious choices for approximately two dozen of these Television News Daily TV blogs. It is a journalist’s responsibility -- no matter what beat he covers -- to always try and gravitate toward the subjects that hold the potential for generating the most interest and readership.

These TV blogs published here about the presidential debates, conventions and other aspects of the political campaign season as they pertain to television were no-brainers. On and around the days they aired, they were the subjects that people were talking about most, and also watching, mainly on TV. Ergo, they were -- and still are -- fodder for a TV columnist.

The aim of these debate and convention columns has never been to promote the virtues of any one candidate over the other. It is merely to try and assess -- with obvious subjectivity, of course -- how the various political players came across on television. Were they likable? Did they sound intelligent? How was his convention speech? How was her demeanor during a debate?

I was heartened by the comment of one reader earlier this week who was puzzled over the TV Blog’s political leanings. “I’ve read your columns where I would swear you are liberal,” wrote this reader. I am not sure how he formed that impression, but it is always best to keep them guessing. Is the TV Blog liberal or conservative, Republican or Democrat? I’m not saying.

I’ll say this, though: Having already come this far in writing morning-after opinions about the debates, it wouldn’t be right to stop now -- which is why you can expect another one this coming Monday following Sunday night’s “town hall”-style debate between Hillary Clinton and Donald Trump.

One thing the TV Blog has learned over many years in the news business is that all news stories have a finite lifespan. Once a journalist starts covering a story, it is their obligation to continue covering it until the bitter end, no matter how long a story takes to reach its conclusion.

That includes the story of this presidential election campaign and how it’s playing on television. While it might seem as if this story will never end, it will end -- like clockwork -- on Election Day.

politics, tv
3 comments about "Like Mount Everest, A TV Columnist Covers Politics Because It's There ".
Check to receive email when comments are posted.
Read more comments >
Next story loading