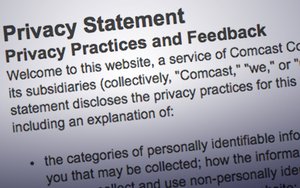 Federal Communications Commission Chairman Tom Wheeler has refined his proposal for broadband privacy rules, but is still recommending rules that could restrict providers' ability to send targeted ads to subscribers.

Wheeler's new proposal, unveiled Thursday, calls for Internet service providers to obtain users' affirmative consent before using data about their "sensitive" activity for ad-targeting purposes. But the FCC is defining sensitive to include broad array of material, including not only data the ad industry considers sensitive -- like geo-location data, health information, financial information and social security numbers -- but also Web browsing history, app usage history and contents of communications (like the text of emails).

The FCC's rules will only apply to broadband providers, and not ad networks, search engines, social networking services or other so-called "edge" providers.

The proposed rules also would prohibit Internet service providers from refusing to offer service to people who don't opt-in to ad targeting. The agency said in a statement that it will take a case-by-case approach to "pay-for-privacy" plans, but added that people "should not be forced to choose between paying inflated prices and maintaining their privacy."

AT&T recently used a pay-for-privacy model in some markets where it offered Gigabit service; in those markets, the company charged as much as $66 a month more to people who refused to receive targeted ads based on their Web-browsing activity. AT&T recently ended that pricing system and now charges all customers the lowest price available for their speed tier.

The organization added that even though it urged the FCC to reject rules that distinguished between sensitive and non-sensitive data, it believes the new proposal "can work for consumer privacy provided the FCC’s definition of 'sensitive' is robust and meaningful."

The Center for Democracy & Technology also said that even though it doesn't think there should be different rules for sensitive of non-sensitive data, it is "pleased that the proposal defines sensitive information broadly to include all content, browsing information, and app usage data."

The agency plans to vote on the proposal on Oct. 27.