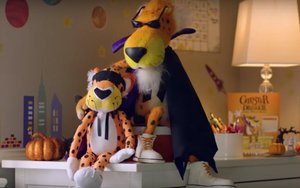 While it’s clearly designed as an engagement and branding effort supporting Halloween sales of Cheetos, it looks like the brand  has created a branded toy that might generate some serious added revenue, if Cheetos had a mind to produce it in mass quantities.

Expanding on its elaborate marketing around Cheetos’ limited-time Bag of Bones packages for the holiday, the Frito-Lay brand offered a Chester Cheetah stuffed animal and an accompanying hardcover book of pranks, “31 Days of Halloween Mischief,” for $29.99 on Amazon.

The toy is dubbed “Chester on the Dresser” because the brand suggests that families put their stuffed Chester in view, and then use the book to inspire them to engage in a month of “tricky but fun” pranks and “playful moments” together. It’s also suggested that this has become a “family tradition” at Halloween.

Sample prank: “Replace kitchen soap with syrup or honey. Next time they wash up, it’ll be really funny. Have the actual soap somewhere nearby so they can wash it off in a blink of an eye.”

The toy-with-book package, which was clearly promoted as a limited, “while supplies last” offer on the brand’s social media pages and by email in the first few days of the month, did indeed quickly sell out. (Actually, the Amazon page says it’s “temporarily out of stock.”)

But the promotions of the pranks from the book continue on the brand’s social media channels. Fans are being encouraged to share photos and videos of their pranks, using #chesteronthedresser, on Twitter and Instagram.

Their contributions are being posted in “Chester’s Halloween Wall of Mischief and Fame” on a dedicated site that also features a video (below, on YouTube) promoting the Chester toy-and-book package and the pranks-for-the-whole-family concept.

The brand’s Facebook page is also now featuring yet another Halloween promotion, “The Delivery.” An image resembling a movie poster shows what looks like an animatronic character who is carrying a box up to a spooky house. Teaser copy: “One small box. One monstrous undertaking. Arriving 10.25.”

Movie theater video ad? Guess we’ll have to stay busy playing pranks until we can find out…