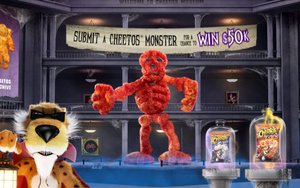 No one can say that Frito-Lay isn’t nimble when it comes to milking a winning concept.

A “Cheetos Museum” contest run over the summer proved a big hit — and the brand announced the next variation on the contest on the same day the first one was being wrapped up.

For the original contest, consumers submitted photos of Cheetos pieces shaped liked animals, objects, or famous landmarks or people for chances to win one of four weekly $10,000 prizes and a $50,000 grand prize.

Entrants were required to share their submissions on their Facebook or Twitter accounts, as well as register and upload them on the “museum” contest site. Fans were also encouraged vote to determine the grand-prize winner.

The contest generated more than 100,000 photos and stories, making the promotion “one of the brand's most successful digital engagement programs of all time," Ryan Matiyow, senior director of marketing, Frito-Lay tells Marketing Daily.

In addition to the social engagement, the contest presumably inspired consumers to go out and buy bags of Cheetos in hopes of spotting a “uniquely shaped” piece amid the mass of unexceptionally shaped bright orange snacks.

On Sept. 21 and 22, the brand displayed more than 40 of the most outstanding Cheetos shape entries at an exhibit in New York’s Grand Central Terminal, including the grand-prize winner — a “Hot Cheetos Cat” — and the weekly winners.
In the same release announcing the grand-prize winner and the exhibition, Cheetos started promoting a Halloween edition of the contest, running from Sept. 20 to Oct. 31.

This time, U.S. consumers 13 years and older can enter by buying Cheetos’ seasonal Bag of Bones packages, or regular Cheetos bags, and using no more than 300 of the pieces to create a Cheetos monster. (There’s also the required “no purchase necessary” submission option, of course.) The photographed creations are again being submitted and showcased on the “museum” site, as well as shared on entrants’ social accounts.

The contest grand prize is again $50,000; other contest prizes include having a recreation of the entry included as a “cameo” in a stop-motion video that will be shown in two theaters (in New York and San Francisco) around Halloween. Contest winners are being selected by panels, not popular vote.

In a sweeps being run simultaneously, six $1,000 prizes (one per entry period) will be awarded through random drawings.