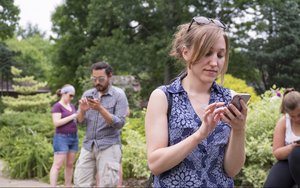 According to a survey of 1,000 gamers from Sequence, two-thirds (66%) of players wish their favorite games were designed social interaction between friends and family, in-person and not just on screens.

“People are hungering for more, and it’s not just going deeper into the screen,” Sequence CEO JoJo Roy tells Marketing Daily. “Despite the advances in technology and immersive experiences, people are looking for ways to get together.”

While many games may have social components, much of this interaction occurs online or between devices. But Sequence’s survey indicates there’s a desire for more in-person interaction. Indeed, 81% of Millennials wish digital games were designed to bring friends and family together.

Some of these changes are already occurring, Roy notes, pointing to the popularity of Pokemon Go, which not only got players interacting with the real world, but encouraged them to work together, as a prime example.

“People are ready for digital games that connect them in more natural, social ways,” Roy says. “Our insights show that increasingly people are seeking a balance between the digital and physical in our culture.”

The survey indicates there’s an opportunity for game developers (and brands looking to gamify experiences) to foster in-person components, Roy says. According to the survey, consumers said they preferred bite-sized games that can be figured out and played in a short amount of time, and that have simple user interfaces and gameplay.

“You can continue to focus on the on-screen experiences, but we’re social animals,” Roy says. “There’s an opportunity for the games to be more successful and compelling.”