No Room For Fun As USA Network Dreams Of Drama Glory 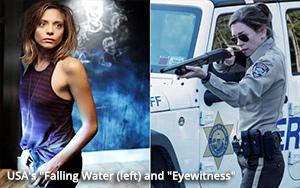 “Falling Water” has nothing to do with the famous house in western Pennsylvania designed by Frank Lloyd Wright. “Eyewitness” is not connected in any way to your local TV news.

If you think the two sentences above introducing this blog post about two new dramas on USA Network signal the onset of a fun column, then guess again.

Fun has nothing to do with them. They’re grim tales, one more so than the other. Both of them feature a requisite supply of multiple corpses -- telegraphing that they intend to assert themselves as “serious” dramas worthy of inclusion in the pantheon of “quality” dramatic TV series that everyone raves about these days.

The first one -- titled “Falling Water” and premiering Thursday night -- begins with a young woman screaming (Lizzie Brocheré, pictured above left). She is seemingly in the midst of giving birth, but then the scene veers off into dream territory.

Dreams are what this show is about. Specifically, it’s about three people -- this young woman who works as a freelance photographer and trendspotter, a New York homicide detective, and a man who works as the head of security at some sort of high-powered investment firm.

In the premiere episode, their stories are shown separately, although we gradually learn that they are each having dreams that contain elements in common. What this will lead to is not made clear in Episode One.

The show’s title -- “Falling Water” -- remains obscure as well, except that water does make an appearance occasionally. Confusion reigns, however (pun intended), because it’s not falling water -- such as rain, for example -- but more like the kind of water that seeps mysteriously into a room from under a door, as it does at least once (and possibly more than once).

The corpses in “Falling Water” begin to stack up as part of a storyline involving a series of murders that appear to be ritualistic. Can clues to these killings be found in these interlocking dreams? This would seem to be the point.

Filmed on various locations in and around New York City, the cinematography in “Falling Water” has a washed-out feel -- as if the show’s producers couldn’t decide whether it should be in black-and-white or color. It ends up being a little bit of both.

At various spots, "Falling Water" adopts a theme that’s become common on TV these days -- typified by USA’s “Mr. Robot,” as a matter of fact -- in which ordinary people are just pawns in a world where unseen forces (in this case, from the world of high finance) control us all. Dream on, USA.

Meanwhile, the same ambiguous cinematography afflicts this other USA series called “Eyewitness,” which is about a triple murder in a cabin in the woods in upstate New York.

This show is the grimmer of the two new shows, although not by much. The eyewitness of the title is a teenage boy from a troubled home in New York City who is being foster-parented by a childless couple in the upstate town of Tivoli in Dutchess County. The wife (played by Julianne Nicholson, pictured above right) is the town sheriff.

There were actually two eyewitnesses to this gory cabin massacre -- this teenage boy plus another boy. The two were having a romantic interlude in this secluded cabin when these thugs suddenly showed up and the teen boys quickly hid themselves away.

The aforementioned troubled teen hid under the bed. If memory serves, the other one may have hid in a closet, which was appropriate since he doesn’t want anyone to know he’s gay. Because of that, the two agreed not to tell anyone about what they witnessed -- even the one boy’s foster mother, who is the sheriff investigating the crime. Oh, what tangled webs we weave, right?

Unlike “Falling Water,” “Eyewitness” is one of these 10-episode “anthology” series that TV is so enamored with these days. “Eyewitness” bears similarities to “The Killing,” particularly in its dreary locations and glacial pacing. The show probably wants to be more like “Fargo,” but it’s a pale imitation.

With both of these new shows and others, USA Network is evidently recasting itself from a network of fun, relatively lighthearted fare (typified by shows such as “Royal Pains,” “Burn Notice,” “Covert Affairs” and “White Collar”) to this new edgy USA in which people have violent dreams, bear witness to multiple murders, seek to become drug queenpins (“Queen of the South”) and conduct cyber attacks against the global power structure (“Mr. Robot”).

With this new approach, USA threatens to become just like every other network. And where’s the fun in that?