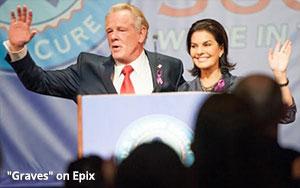 I had a choice for today’s TV blog -- either write about this weekend’s episode of “The Simpsons,” a tried and true subject if there ever was one, or this new series starring Nick Nolte as an ex-president of the United States.

The Nolte show won for one big reason: It’s great.

It’s called “Graves,” and it’s on Epix, which is not a channel I am in the habit of looking for. In fact, Epix has never exactly been on my personal radar (to say the least), but all of a sudden, I am a lot more aware of it than I was a day ago, before I slipped a preview DVD of this new show called “Graves” into my PC to give it a look.

“Graves” is the name of the character Nolte plays -- Richard Graves, a former president who has been out of office for 25 years. By all appearances, the opportunity to play this character was one that the actor didn’t take lightly. The role fits him like a glove and as a result, Nolte, 75, gives one of the best performances currently to be seen anywhere on TV.

I liked “Graves” because it’s smart. It gives us a character of considerable complexity. In the show, President Graves is a politically conservative Republican from New Mexico who is considered by presidential historians and political pundits to have been among the worst presidents in the history of the United States.

Now deep into the post-presidential phase of his life, the ex-president is in demand for speaking engagements and personal appearances, but he dislikes the lifestyle because it makes him feel like a carnival attraction. And he also realizes the remarks and speeches he is asked to deliver are superficial and phony.

I won’t reveal what happens next because I don’t like to play the spoiler role, particularly when writing about a show I liked and wish others to have the opportunity to enjoy too.

“Graves” is enlivened by a strong supporting cast that includes Sela Ward as Graves’ wife and former first lady, and Ernie Hudson as a fixer who gets wayward family members out of various jams.

None of the cameos were gratuitous either. They all worked, just like everything else in this very attractive new comedy.

“Graves” is filmed in and around Albuquerque and Santa Fe, New Mexico -- one of the most beautiful locations you could ever hope for in a TV show. After watching the first episode of “Graves” -- clocking in at about 33 minutes -- I was eager to watch more, which is a rarity for me. Luckily, the people at Epix sent me three episodes of “Graves,” for which I thank them.

Why was “The Simpsons” in contention for this Friday TV blog? Because it’s marking a milestone this Sunday night on Fox -- its 600th episode, which is an unheard of number for a prime-time network TV series. The show also happens to be the annual “Simpsons” Halloween show -- “Treehouse of Horrors XXVII.”

There’s nothing wrong with another “Treehouse of Horrors” show, and 600 episodes is certainly a milestone worth noting. The show is very good too, certainly up to the standards that fans of “The Simpsons” have come to know and expect. Among the cameo appearances here are Sideshow Bob (whose voice is provided, as always, by Kelsey Grammer) and the ghost of Frank “Grimy” Grimes, a long-dead former co-worker of Homer’s at the nuclear plant.

But it isn’t exactly news that a new “Simpsons” episode is superlative, since most of them are. That’s why “Graves” is the more newsworthy of the two -- a surprise show that came out of nowhere and looks like it’s going somewhere.