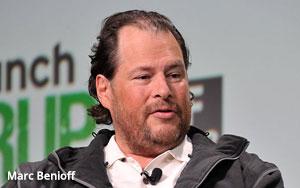 In an interview with the Financial Times, Benioff said that Twitter wasn’t a good fit for the cloud company and that they will not be pursuing a bid.

Twitter’s stock has dropped by a third over the past ten days as potential bidders drop from consideration. Rumors began in early October that Twitter would soon be acquired when The Wall Street Journalreported that Twitter’s board was meeting with potential bidders, including Salesforce, Apple, Disney and Google. All four bidders have now stated they would not pursue an acquisition.

Upon news that Salesforce has ditched its bid, Twitter stock dropped 6% while Salesforce shares jumped more than 5%.

This is the first time that Salesforce -- which has acquired nine companies thus far in 2016 alone -- has publicly announced that they would not pursue an acquisition.

Salesforce most recently announced the acquisition of Krux, a personalization-driven marketing technology company, for $700 million in cash and stock on October 3. Krux’s behavioral-tracking analytic capabilities will soon find itself a home in the Salesforce Marketing Cloud.