In Presidential Puppet Campaign, The Media Pulls The Strings 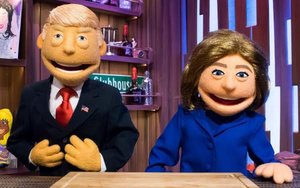 The media has hijacked the presidential campaign.

It's a sweeping generalization, to be sure, but please hear me out.

This thesis statement stems from a media overload from this campaign that must be affecting a lot more people than just me. Am I right?

Which media? TV, talk-radio, the Internet, social media, Wikileaks and Putin. These last two are included in the mix because they’re using the tools of contemporary media -- trolling, hacking (or whatever you want to call the exploitation of computer networks), social media, access to news organizations -- to undermine the election and control the narrative.

Disclaimer alert: The hacking accusations leveled at the Putin government in Russia are not confirmable, and to my knowledge, the Russians have not owned up to it. But the U.S. says they are hacking into private email accounts of U.S. presidential candidates and their campaign staffs, so who am I to argue?

In a way, our media is so pervasive, and filled with so much information (accurate or otherwise), that you find yourself understanding or absorbing very little of it. To apply an old cliché, you might say it's a case of not being able to see the forest for the trees, but I have arrived at the point where I cannot see the forest or the trees.

Last week, I quit Facebook. Maybe I'll go back after the election or maybe not. God love my Facebook friends, but I reached my limit with the constant sharing of partisan slogans, manipulated photos, viral videos of the candidates dancing and singing and the like, and all of those op-ed pieces from media sources both reputable and obscure that either blasted or extolled each of the candidates.

Enough already. It got to the point where I began to miss the regular Facebook posts I used to complain about in which people would post pictures of their kids going to their first prom or their fabulous vacation in the Bahamas. That's what Facebook is for, isn't it?

I didn't unfriend anyone on Facebook, but I unfollowed a couple of people on Twitter. These were people who have suddenly become experts on wars, foreign policy, economics, race relations, the truth or falsehood of sexual assault claims, and the character of each of the candidates -- something that is ultimately unknowable by any of us who do not know either of the candidates personally.

Not surprisingly, most people -- myself included -- tend to form our opinions based on the media we consume. This includes news sources such as TV networks (first and foremost) and for some of us, newspapers. And there is the Internet, with many of us picking up news items from the home pages of Yahoo or AOL, or worse, from tweets posted by people you follow.

On Twitter and Facebook, the “news” you consume is always accompanied by a biased statement. That’s what real people do. You are supposed to expect more from newspeople and news organizations, however, but today, the biases toward either the left or the right on the part of our leading news institutions is a given.

The New York Times is slanted toward progressive, liberal or Democratic views. Fox News Channel is slanted the other way. I am sure we can all form a list in our heads of the other “big media” news sources we use and determine their biases without even having to think about it much.

Nobody is giving you the straight story, but it's also true that few of us are making the effort required to learn all the details anyway. Instead, we write tweets and post photos of Trump or Hillary on Facebook with slogans photo-shopped on them.

The entire presidential campaign in the last few days has been overtaken by a flurry of competing accusations -- women coming out of the woodwork to level their assault accusations at Donald Trump, and Wikileaks releasing Clinton-related emails day after day after day.

Our compliant news media eats it all up because they have so much time and space to fill -- at a pace that permits little or no time for actual investigation -- that it just gets shoveled out there. Then the accusations and the emails get discussed ad nauseam on the news channels by panels of talking heads -- many of whom are no more expert on any of these issues than you or me.

Who's running this election? It is an irresponsible media apparatus that is so sprawling it cannot be controlled or held to any of the traditional self-imposed standards that used to “govern” journalism. The end result is a free-for-all -- a news media and political elite talking more to each other than to the audiences they serve, and an electorate left out in the cold.