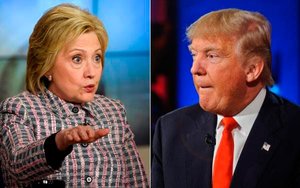 What’s it going to be then, eh? Huge ratings, or an electorate so turned off by now that they’ll stay away from this third presidential debate in droves?

On the one hand, you have an event Wednesday night that represents the final time Hillary Clinton and Donald Trump will ever come face to face to wage combat on a public stage. And of course, it will be on virtually everywhere and therefore difficult to miss or otherwise avoid.

Why try and avoid it in the first place? One reason might be: Because you’re sick of the whole thing. But it’s also the one thing everybody will be talking about on Thursday, so the temptation to watch at least some of it, with one eye if not both of them, will be too great to resist (at least in theory).

It seems highly appropriate that this third and final debate will be staged in Las Vegas, the mecca of prizefights -- which is the way the news channels have been promoting it. The analogy to a Vegas-based boxing match would have been even better if this debate were held in a casino arena. As it happens, it will be at UNLV.

What will it look like on TV? Well, if you thought the last debate was just about the ugliest thing you’d ever seen in the political realm in your entire life, then hold on to your hats (and your noses). This one has the potential to be even worse (or better, depending on your point of view).

Where the potential for a record or near-record audience is concerned, this debate has several things going for it. It’s the last one, for one thing -- so it’s the last chance to see a spectacle like this (at least for four years).

Plus, since many people gave a victory to Clinton in the first one and Trump in the second one (to the extent that declaring a victor in a presidential debate is even possible), you might look at this third one as the decisive match-up in a three-debate series, like a baseball playoff.

But it is also true that for many of us, three televised confrontations between these two represent one, or possibly two, too many. At this point, what are we going to learn about either of them that we don’t know already, other than how well they can take a punch (to continue the boxing analogy)?

After two of these debates, plus all the other verbal punches thrown everyday in this campaign, we know by now that they can take it and dish it out too, though it hasn’t been pleasant to watch.

With less than three weeks to go until Election Day, we are already reading stories speculating that voter turnout will be low because (a) we don’t like the candidates enough to vote for either one of them and (b) we’re so tired of the whole embarrassing circus this campaign has become that many of us have decided to just quit the process and not participate in the voting.

You hear the same thing from people when it comes to watching this third debate Wednesday night. We’re sick of it, you hear people say. It’s too mean, say others. He assaults women, many now complain. She’s a liar, complain others.

How can anyone endure another 90-minute televised debate that puts all of it on display for the third time in a month (not counting the vice presidential debate on Oct. 4)?

Well, many of us will endure it because after this, it’s all downhill toward Election Day. It’s true that the presidential campaign has been so contentious and so omnipresent in our media for so long that many of us won’t miss it when it’s over. But neither would we dare miss it while it’s still here.