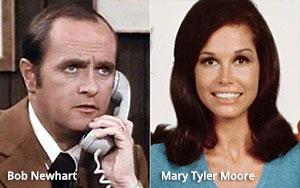 The Sundance channel has come up with a novel way to promote the addition of some very old TV shows to its daytime lineup.

The cable network, now known officially as SundanceTV, is positioning the shows as if they are somehow connected with the current era of TV shows. It's a stretch, but credit Sundance for having the moxie to float this approach anyway.

The shows are undeniably classic and well-remembered -- especially by those of us who are old enough to have watched them in their first runs on CBS in the 1960s and ’70s. They are: “The Andy Griffith Show” (the only one from the ’60s), “The Mary Tyler Moore Show,” “The Bob Newhart Show,” “All in the Family” and “M*A*S*H” (journalist's note: This last show, although beloved by all, has the most difficult title to type in all of TV history).

The four shows listed here from the ’70s formed a mini-Golden Age all their own when they first aired. And now, Sundance is framing them as the forerunners of today’s Golden Age (another note: This “Golden Age” designation is something other people say about TV today, although I happen to disagree for reasons too complicated and tangential to go into here).

“These shows … have inspired many of today's leading writers and directors in TV and film,” said a press release that arrived Thursday from Sundance.

“Just as we've turned Wednesday nights into the showcase for SundanceTV originals, we want to turn our daytime weekdays into a celebration of some of the most iconic and award-winning shows in TV history,” said a prepared statement attributed to Jan Diedrichsen, executive director of Sundance. “SundanceTV celebrates visionary and breakthrough storytelling,” this statement continues, “and many of today's leading creators in both television and film cite these TV classics as ongoing inspirations.”

None of these “creators” are named, however, so I guess we are all supposed to take his word for it that these unidentified individuals, whoever they are, were thus inspired by Andy Griffith and the rest (although maybe we can at least assume Ron Howard learned a thing or two at Andy’s knee).

Sundance is packaging these old reruns under the umbrella title “The Set,” with the tagline: “Timeless. Timely, TV.” Whether these old TV shows are really “timeless” is a viewpoint better left up to individual viewers. I happen to think “The Andy Griffith Show” is the most timeless of the bunch. It is a wonder to behold.

The “Timely” designation has something to do with what Sundance sees as the 1970s shows’ “progressive storylines.” Presumably, these would include the “Moore” show’s focus on an unmarried career woman as the central character, the subject of war on “M*A*S*H,” and the many themes explored on “All in the Family,” including racial attitudes, sexuality in all its forms, and other topics that were new for TV at the time.

These were certainly “timely” shows in their time, but are they still timely in the context of today? Again, that's a subjective question. Perhaps many of the topics raised on the shows are ones we still argue about today. But certainly, they were raised then in the context of that time, which was not the same.

Today's world is very different. You can say the same for the world of TV then and now. Sundance's press release goes into the many awards these shows won -- dozens of Emmys, Peabodys and Golden Globes. The awards were well-earned, but it’s also true that there were so fewer TV shows generally then that the handful of really good ones tended to collect armloads of awards year after year.

That’s not a criticism, of course. That’s actually a reason to pay attention to these shows. Sundance will begin airing this five-hour block of shows on Monday, Nov. 7, from 6 a.m. Eastern to 1 p.m. Each show's episodes will be aired in chronological order, starting with each pilot, Sundance said.

Each five-hour block will consist of 10 episodes of each show -- “M*A*S*H” on Monday, “All in the Family” on Tuesday, “Mary Tyler Moore” on Wednesday, “Bob Newhart” on Thursday and “Andy Griffith” on Friday.

Let the record show that all of these shows are already available to watch elsewhere, and have been for quite a while. “M*A*S*H,” “Mary Tyler Moore,” “Bob Newhart” and “Andy Griffith” are all seen currently on MeTV. “All in the Family” is on AntennaTV.

Sundance's highfalutin packaging of these shows is a clever way to position a group of shows that are not exactly difficult to find (and DVR to your heart’s content) elsewhere.

However, the network is not guilty of trying to make silk purses out of sows’ ears. All of these shows are already silk purses. Adding them to the Sundance lineup gives all of us another option for seeing them, and exposes them to a generation who might not have experienced them yet. And that's a good thing.