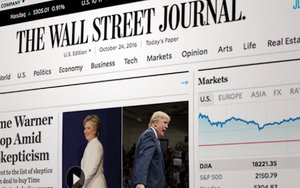 The Wall Street Journal Editor in Chief Gerard Baker announced in a memo Friday that the publisher is seeking “a substantial number” of buyouts to limit the number of layoffs it will inevitably need to undergo.

IAPE contract negotiations with Dow Jones management had hit a “crossroads” over pay raises and health care costs. Dow Jones negotiators backtracked on certain proposals in its latest offer, blaming “volatility in the advertising-sales market” and “no evidence that the trend will reverse.”

In the Friday memo, Baker explained: “In order to limit the number of involuntary layoffs, we will be offering all news employees around the world — management and nonmanagement — the option to elect to take an enhanced voluntary severance benefit.”

The publisher has "begun an extensive review of operations as part of a broader transformation program,” Baker added.

Employees have until Oct. 31 to be considered for the buyout.

The news precedes an impending earnings report on Nov. 7. News Corp, which owns Dow Jones, likely hopes to cut staff before the report is released to reassure investors that the company is already cutting costs, softening the blow of declining print advertising revenue numbers.

The WSJ memo inadvertently revealed that Barron’s is also preparing for layoffs.

Barron’s Editor in Chief Ed Finn made a big email faux pas. According to a report from Politico, Baker’s memo was sent to WSJ employees as well as Finn. Barron’s is owned by Dow Jones. Finn reportedly meant to forward Baker’s email to Dow Jones Media Group publisher Almar Latour and two other company executives to discuss how the WSJ buyouts would affect an upcoming round of layoffs at Barron’s.

However, instead of hitting “forward,” Finn clicked the dreaded “reply-all” and accidentally sent the email to an unsuspecting WSJ newsroom.

"The email Gerry Baker just sent about WSJ buyouts says that DJ is offering 1.5x the standard buyout package," Finn wrote in the email. "Are we planning to go to the employees we are laying off at Barron's next week and offer them 1x the standard package. That could create some problems. Please advise."

Finn told Politico in an email that the email was “not intentional.”

"It was a mistake. We had not been told what package was being offered to the several Barron's folks who would be laid off next week," he wrote.
email, employment, newspapers
Next story loading