Senator, FCC And Others Support FTC In Battle Over AT&T Data Throttling 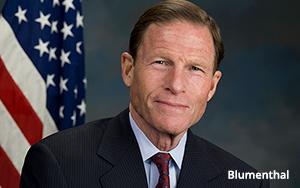 The Federal Trade Commission is drawing support in its battle with AT&T from other policymakers, including Senator Richard Blumenthal (D-Connecticut) and the Federal Communications Commission, as well as privacy experts and advocacy groups.

Blumenthal, the FCC and others are asking the 9th Circuit Court of Appeals to reconsider a recent decision dismissing an enforcement action against AT&T. The FTC alleged in an October 2014 complaint that AT&T duped more than 3.5 million people by selling them unlimited data plans, but slowing their connections after they exceeded monthly allotments ranging from 3 GB to 5 GB.

Earlier this month, the FTC sought a new hearing in front of at least 11 of the 9th Circuit's judges.

Blumenthal argues in a proposed friend-of-the-court brief that the panel's ruling creates "a wide hole in FTC jurisdiction that undermines the agency’s ability to remedy deceptive acts committed by the growing range of companies that engage in common-carrier activity as well as non-common-carrier activity."

"If the panel opinion stands, it will greatly limit the government’s ability to police unfair and deceptive practices in fields that Congress has long considered within the FTC’s authority," the lawmaker adds.

He goes on to argue that the decision could leave the FTC unable to police companies like Google, which owns the Internet service provider Fiber. "A sprawling Internet behemoth with revenues from selling advertising, hardware (e.g., smartphones, tablets, laptops), and software (e.g., the Android operating system), Google has historically been subject to FTC jurisdiction," Blumenthal writes. "But Google also owns Google Fiber, a broadband internet service. In light of the panel opinion, Google could argue that Google Fiber renders it immune from government oversight."

The Federal Communications Commission said in a separate proposed friend-of-the-court brief that the panel's decision is "at odds with the realities of the marketplace, in which entities that provide communications common carrier services have expanded their lines of business to include non-common-carrier offerings (or vice versa)."

A group of law professors with expertise in privacy and data security also are weighing in on the FTC's side. The professors say the earlier opinion "creates serious risks for the privacy rights of every American.

"The panel opinion’s sweeping interpretation would immunize many of the largest information intermediaries in the modern economy -- potentially including companies such as Facebook, Google, and Yahoo -- from almost all meaningful privacy oversight," the law professors say in a proposed friend-of-the-court brief. "This outcome would be disastrous."

AT&T is expected to respond later this month to the FTC's request for a new hearing. The company revised its throttling practices last year. AT&T now only throttles people who consume more than 22 GB of data in a month, and only when the network is congested.