CBS Bellies Up To The Genius Bar For Another Round 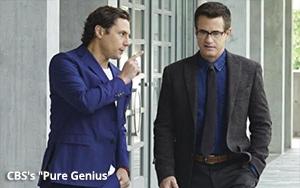 Another day, another gaggle of super-geniuses on CBS.

This time, they are led by a “Silicon Valley tech titan” (CBS’s description) who is so smart (also young and rich) that he is taking on the entire medical industry by establishing his own super-hospital staffed with super-doctors.

He’s a “disrupter” -- something all young men (and some women) aspire to be these days, or so I keep hearing. In this new dramatic series -- titled “Pure Genius” and premiering Thursday night -- the name of this genius disrupter is James Bell and he is played by Augustus Prew.

In the premiere episode, Bell is seen recruiting a renowned surgeon (played by Dermot Mulroney) to the staff of his super-hospital. So we -- and this genius surgeon -- get to go on a tour of this high-tech hospital and see all of its wondrous gadgetry.

In this hospital, we soon learn there is a gadget for every emergency -- high-tech “clipboards” that are actually transparent tablets, for example, or a capsule-sized microcomputer known as an “ingestible” that is given to a pregnant woman as a way of monitoring her unborn child from inside her womb.

No less miraculous are the diagnoses resulting from futuristic software 100 times faster and more accurate than diagnoses generated by human brains. In this hospital, there is no room for error. Indeed, there doesn’t really seem to be any errors, as the risky procedures and questionable first-time-ever remedies pile up, one on top of the other, without failure.

At one point well into the premiere episode, this super-cool tech titan even devises (actually, buys from some other geniuses he discovered in a Google search) a method for determining if a comatose girl is still “alive” inside her brain. The tools used here: High-tech, telepathic helmets enabling the comatose girl to “communicate” telepathically with her mother.

At least that’s what I think happened, but I’m not really sure. Either this scenario was not explained adequately in the show or this explanation went right over my head. Probably a little bit of both.

As anyone knows who has been to an Apple store, the help desks there are known as genius bars, which sound like they could be watering holes where the characters from CBS dramas are likely to congregate.

I have mentioned this phenomenon before, in other reviews earlier this season -- mainly, that CBS loves geniuses, from the Dr. Phil-inspired psychologist and jury picker in “Bull” to the new “MacGyver” and returning series such as “Scorpion,” with its team of super-genius wunderkinds who know everything and can do everything too (just as long as there is a computer keyboard or a swipeable tablet screen somewhere nearby).

In “Pure Genius,” James Bell is not a doctor, but more like a medical MacGyver, although he doesn’t fashion his gizmos on the fly from parts he finds around the house.

With this show, CBS has conjured a health-care fantasy world, where people in dire need of lifesaving medical assistance will find it available at the press of a button. And it’s free too, because there’s this billionaire who seems willing to pick up the tab. Not only that, but his hospital is clean, efficient, ultra-modern and staffed with the nicest, most dedicated people you will ever find (or never find, as a matter of fact).

As exciting as all this might sound, it is wholly unrealistic, and also surprisingly dull. At one point while watching the pilot episode of “Pure Genius” the other day, I thought the episode must be at least three-quarters over, but then I discovered that there was still more than half of it left to go.

Time enough for a few more high-tech gizmos, and the kind of medical miracles that you only seem to see on television.