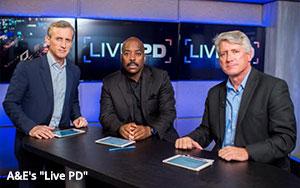 An array of portable and “fixed” camera equipment is making it possible for a new TV show to bring real police action to prime time – live and in real-time.

Of course, “action” is the key word here, and the focal point of a key question: What if there isn't any? Action, I mean.

But first things first. This new show is called “Live PD” and it is scheduled to premiere Friday night (Oct. 28) on A&E. Eight two-hour episodes are planned, A&E says.

The show will have an anchorman -- Dan Abrams -- who will be joined in a New York studio by two veteran detectives from the Dallas PD, Kevin Jackson and Rich Emberlin (all three are seen in the photo above).

They will discuss and explain the action that viewers will see as police go about their business. Six police departments are featured in the series, with the action (there's that word again) shifting from one to the other during the course of each episode.

In a news release issued earlier this month, A&E positioned the show this way: “Over the course of eight weeks, dash cams along with fixed-rig and handheld cameras, will capture the work of a varied mix of urban and rural police forces around the country on a typical Friday night.”

As I understand it, fixed-rig cameras are an array of cameras mounted in various “fixed” positions such as, in this case, the interior of police departments. Body cams -- the kind of portable cameras worn by police in a growing number of locations lately -- were not mentioned in A&E's brief list of equipment from which the images for this show will be obtained. Perhaps these cameras are not capable of providing live video.

The news release frames the show in the context of “the debate over the policing of America,” although the release avoids coming right out and saying that this “debate” is not necessarily about police work generally, but about police and their interactions with the African-American community.

“As the debate over the policing of America continues to be a part of the daily conversation across the nation, A&E will offer viewers unfettered and unfiltered live access inside the country's busiest police forces and the communities they patrol,” the news release says in its very first paragraph.

OK, stop right there. These don't seem like they would qualify as “the country's busiest police forces.” They are police departments in Tulsa, Oklahoma; Bridgeport, Connecticut; Walton County, Florida; Richland County, South Carolina; Arizona (the city or county was not specified); and Utah (the Utah Highway Patrol).

I am sure there are some bad hombres in all of these precincts (aren't they everywhere?), but I would be surprised if any of these are the “busiest” police forces in the nation. Let the record show that homicide detectives from the Tulsa PD are already featured in another A&E police show, “The First 48.” And yes, these detectives do seem to be quite busy.

The three commentators “will guide viewers through the night, giving insight to [sic] what audiences are seeing in real time, bouncing minute-by-minute between the featured police departments and offering an inside look at each live incident,” A&E said.

This description sounds like the show runs the risk of looking like it intends to turn police work into some kind of a televised sports event accompanied by play-by-play and analysis. Hopefully, it won’t come across that way.

On paper, “Live PD” seems like a very ambitious project. Great effort was probably expended to persuade these police departments to participate. The marshaling of all the technical elements for these live telecasts must also have been arduous.

So what about the key question referenced above: What if you work very hard to put on a very complex, live TV show, and nothing happens? By “nothing,” I mean no real, gritty confrontations between cops and bad guys.

What if most of the show consists of cops riding around in their patrol cars looking out the window, idly chatting and sipping coffee? Cop joke alert: Is Dunkin' Donuts a sponsor?

Sorry about that. I realize police work is difficult, delicate (in the context of becoming involved in very complicated interactions with people in distress), dangerous and in some cases, deadly.

Perhaps the show will succeed in showing all aspects of police work -- from the mundane to the intense. Hopefully, nobody will get hurt. “As with many live events, due to the potential of capturing intense and possibly disturbing content, the program will air on a delay,” A&E said.

For material to qualify as too disturbing for A&E, it must be very disturbing indeed.