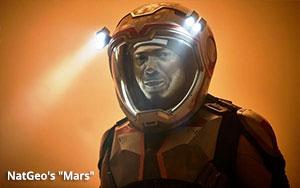 The first story out of last week’s barnstorming of New York City by the folks at the National Geographic Channel was that they have removed the word “Channel” from their name.

While eliminating the word “channel” from the name of a TV channel might seem somewhat odd (or perhaps unnecessary), one attendee at a lunch NatGeo put on for the press last Tuesday noted that National Geographic magazine dropped the word “magazine” from its name in 1959 and no one seems to have noticed. This attendee happened to be the magazine’s Editor in Chief, Susan Goldberg.

NatGeo staged this lunch and news conference in support of a single word, but the word wasn’t “channel.” That announcement was really a footnote to a larger story about a word that NatGeo has chosen as a one-word tagline and positioning statement that is poised to become an essential (if not ubiquitous) element in all of its brand promotion.

The word is: “Further.” To underscore the word’s significance, NatGeo held its luncheon in an event space on the 102nd floor of the recently completed building known as One World Trade Center in lower Manhattan. It’s the tallest building in New York (and the United States) and the view allows you to see “further” than any other vantage point in New York City and its surroundings.

The process of winnowing this tagline down to a single word was undertaken because the chosen word also had to work internationally and in dozens of languages, explained Declan Moore, CEO of National Geographic Partners. The partners referenced in that name are the National Geographic Society and 21st Century Fox – companies that are now partners in National Geographic’s “television channels [and] other media and consumer-oriented assets,” according to NatGeo.

Looking down from the 102nd floor, reporters could see a temporary facility that had been built on a vacant lot not far away in celebration of a new six-part series called “Mars,” premiering Nov. 14. This “event” series combines fiction and non-fiction content to tell the story of a mission to start a human colony on Mars in the year 2033.

In an illustration of how the TV network and the magazine are now working synergistically with each other, the magazine has Mars on the cover of its November issue, along with a line or two promoting the TV series.

NatGeo screened the premiere episode last Wednesday night in a theater on West 23rd Street. Among those in attendance were co-executive producers Ron Howard and Brian Grazer, and Space Shuttle astronaut Mae Jemison.

After the screening and a panel discussion about the potential for establishing an embryonic colony of humans on the red planet, the audience went outside to board buses to this “Mars” experience with which NatGeo had colonized this vacant lot in lower Manhattan.

In a series of futuristic tents, guests dined buffet-style on sliced beef and branzino (with mashed potatoes and sautéed Brussels sprouts as side-dish offerings), plus hors d’oeuvres served by roving waitpersons. Drinks at the bar included one called “the Red Planet” especially concocted for this event. Among the ingredients: Vodka, lemon juice and grenadine.

In one tent, you could ride on a chair that hoisted you into the air while you wore virtual-reality goggles -- allowing you to experience a simulated landing on Mars. The ride was thrilling.

At both of its events last week, NatGeo officials (represented mainly by Courteney Monroe, CEO of National Geographic Global Networks) promoted the “Mars” series, and also the two-hour special on global warming that just aired Sunday night, “Before the Flood,” featuring Leonardo DiCaprio; the series called “Years of Living Dangerously,” which premiered its second season Sunday night; and a rebooted “Explorer” series premiering later this month.

The thing that struck a reporter most about NatGeo’s events last week was that this kind of elaborate screening and party-throwing was once the exclusive province of HBO, whose promotional events are legendary. Now, suddenly, National Geographic (of all networks) is doing it too -- a sign of just how hard a TV company has to work these days to promote itself and stand out from the crowd.