'TV Blog' Marks No. 600, Reflects Back On Era Of Massive Change 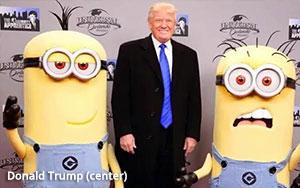 Six hundred bylines ago, the TV Blog set sail on a voyage of discovery in the vast ocean of media and television.Yes, TV Blog readers, your daily fix of cogent commentary on the wacky world of television reached a milestone just yesterday – the 600th blog under its current author since starting this writing assignment 26 months ago in September 2014.

A milestone as momentous as this one provides an opportunity for reflection on the many ways the media and television landscapes have been transformed in a little more than just two years.

Want an example? Take the very first of these TV blogs published on September 16, 2014 -- a review of the season premiere of “The View” that fall, which included the return of Rosie O’Donnell. Today, she’s no longer there! (She lasted about six months.)

The undisputed champion of these blogs -- based on the sheer number of his appearances here -- has to be Donald Trump -- casino owner, ugly-building developer, TV star and now, presidential candidate. If someone had predicted back in September 2014 that two years later we would be contemplating electing Donald Trump as president of the United States, you would have thought this person was crazy. And yet, two years later, here we are. It’s another massive change!

How different it all seems. And the same too. In September 2014, TV was embarking on yet another new season – one filled with hope, hype and expectations (many of them low). And yet, so many of the shows that premiered that fall are no longer around! It’s amazing. The same goes for dozens (if not scores) of other shows that came and went in the last 26 months.

See if you can remember any of these: “Tethered,” “Mulaney,” “Marry Me,” “Constantine,” “Backstrom,” “Breaking Greenville,” “Battle Creek,” “One Big Happy,” “Weird Loners,” “The Bastard Executioner,” “Heroes Reborn,” “Donny!,” “Truth Be Told,” “Wicked City,” “Angel from Hell,” “Second Chance,” “Crowded” and “Heartbeat.” Don’t remember? I reviewed them all. Alas.

Of course, there was more to the first 600 of these TV blogs than reviewing shows that soon disappeared. Other than Trump and his TV candidacy, the longest-running story for a while was the generational changeover in late-night TV.

Leno and Letterman left. So did Jon Stewart and Craig Ferguson. Jimmy Kimmel stayed, and grew a beard. James Corden came on board, and so did Seth Meyers, Trevor Noah and Larry Wilmore. Stephen Colbert said good-bye to Comedy Central and hello to CBS. Wilmore was cancelled.

For my money, there is nothing more fun than reviewing and writing about TV’s most outlandish program concepts and one-off specials. Remember “Eaten Alive” on Discovery Channel? This special had a herpetologist agreeing to be swallowed by a giant anaconda in the interest of science. Viewers tuning in to this show had every reason to expect this ballyhooed swallowing to actually take place. It did not.

Who can forget these great shows: “My Husband’s Not Gay,” the TLC reality show about a group of suburban husbands who are very close friends (wink, wink); “Sex Box,” the reality show in which couples went into a “box” (actually a small camper), and then came out to talk about the sex they just had; and “7 Little Johnstons,” a TLC series about a family of seven dwarfs. No, none of them were named Sneezy or Grumpy. Shame on you for thinking that.

The 600 blogs were not without their highlights too. The finales for Letterman, Ferguson and “The Colbert Report” were among the best of their kind that ever aired. Other shows that were recognized here for their excellence were “Downton Abbey,” “Project Runway,” “Dancing With the Stars,” “The Comeback,” “Better Call Saul,” “Empire,” “The Americans,” “Justified,” “Modern Family,” “Mad Men,” “Wolf Hall,” “Nurse Jackie,” “Moone Boy,” “Mr. Robot,” “Ray Donovan,” “The Carbonaro Effect” and, as it turns out, many more than received thumbs-down, as a matter of fact.

I once had an editor who detested the many news releases from the TV networks that came our way announcing that this or that show was “celebrating” its 100th episode or its 200th or even more. These announcements weren’t news, he would complain. And I agreed with him -- right up until the day I felt like writing about reaching my own milestone of 600 TV blogs written here for Television News Daily.

Six hundred is quite a number to reach. In fact, just last month, Fox made a big deal about “The Simpsons” reaching a similar milestone -- its 600th episode. That’s kind of the same thing, isn’t it?

tv
6 comments about "'TV Blog' Marks No. 600, Reflects Back On Era Of Massive Change".
Check to receive email when comments are posted.
Read more comments >
Next story loading