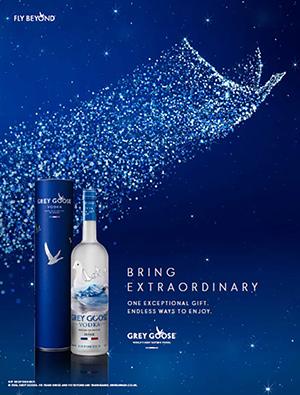 Grey Goose is quite literally lighting up the holidays, with a global TV, digital, print and outdoor campaign dubbed “Lumière” that launched this week in North America.

In the TV and digital creative (below), a couple arrives, via seaplane, at a New Year’s Eve house party being thrown in a modern chalet amid a gorgeous mountainous setting. They not only “bring something extraordinary” — the bottle of Grey Goose alluded to in the campaign’s tagline — but also provide a spectacular light display over the woods.

The 60-second version of the video, directed by Johnny Green (known for his Misty Copeland Under Armour spot and work for Audi, Hennessey and Jean Paul Gaultier), will run on social media platforms including Facebook and Instagram, as well as in theaters in Europe.

The 30- and 15-second versions will run in network and cable programming throughout the holiday season.

Full-page ads will also run in Vanity Fair and other magazines starting in November and December issues.

The campaign is the first holiday work for Grey Goose from BBDO NY since it won Bacardi USA’s business last year.

The work builds on the vodka brand’s “Fly Beyond” marketing platform, which focuses on celebrating extraordinary experiences.

It follows this past summer’s ‘La Pursuit’ ad, which featured a similarly adventurous couple taking a blimp to bring Grey Goose for the “Le Grand Fizz” cocktails being served at another party in a fabulous, remote location.