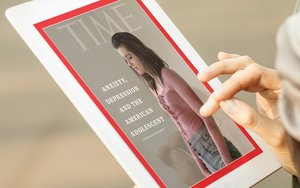 The company’s advertising revenues overall increased $19 million or 5% in the third quarter of 2016, compared to the same quarter last year.

But it's not enough to offset print declines.

That's thanks to Time Inc.’s recent acquisition of Viant, a targeting and data platform, which is "beginning to yield incremental revenue across the portfolio,” stated Time Inc. president and CEO Rich Battista.

Battista also praised the recent reorganization of Time Inc.’s ad sales and editorial operations, which allows the company “to move with more speed, agility and focus, while better leveraging our major audience scale.”

However, digital advertising growth was not enough to offset print revenue decline, which was about 10% to $288 million, compared to the same quarter last year.

Circulation revenues decreased $38 million or 15%, due to the “continued shift in consumer preferences from print to digital media.”

As a result, overall revenues decreased $23 million or 3% in the third quarter of 2016, compared to the same quarter last year at $750 million. The finding missed analysts’ estimate of $770.6 million, according to Reuters.

Time Inc. said it now expects full-year revenue to hit around -1% to flat, lower than the prediction in the prior quarter of flat to positive 1.5%.

According to a Reuters report, Time Inc., which publishes People, Sports Illustrated and Fortune magazines, plans to hold off on any further restructuring, unlike The Wall Street Journal and Gannett, which are undergoing a series of layoffs and consolidation.

Gannett, after reporting a 15% drop in print ad revs, plans to lay off around 350 employees. The Wall Street Journal announced it is seeking “a substantial number” of buyouts to limit the number of layoffs it will otherwise have to make.

This summer, Time Inc. underwent a major restructuring, eliminating publisher roles and consolidating the organization of its sales and marketing teams.