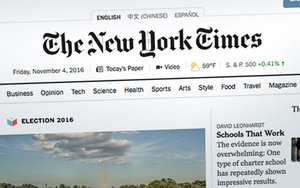 The New York Timesis suspending its paywall for 72 hours, from November 12:01 a.m. ET on Monday, November 7 until 11:59 p.m. ET on Wednesday, November 9, to allow uninhibited digital access to its content for the “the lead-up through the aftermath” of the presidential election on November 8.

"This is an important moment for our country. Independent journalism is crucial to democracy, and I believe there is no better time to show readers the type of original journalism The New York Times creates every day,” stated Arthur Sulzberger Jr.

The Wall Street Journal and The New York Timeshave a tradition of lowering their online paywalls for presidential election coverage and other important national events.

In 2012, NYT and WSJ lifted their online paywalls for coverage of Hurricane Sandy, giving readers free access to important information regarding the weather emergency, such as location of shelters, lists of school closings and maps of evacuation zones.

In 2011, NYT pulled down its paywall during Hurricane Irene, as well.