Marketers argue that engagement with consumers is what moves product. If you take that idea and apply it to Hillary Clinton and Donald J. Trump and compare it to the election results, the numbers are interesting.
NewsWhip, which tracks stories on social media and  has some powerful users, , put out fascinating data in the last week that emphasizes the Trump and Clinton paths by counting the likes, comments and shares.

In the aftermath of the election, NewsWhip took a look at the sites that had the most engagement and impact in Facebook news feeds as the election story unfolded. “Engagement,” when it comes to politicians like Clinton and Trump doesn’t mean consumers had positive reactions, but when matched with where many of the engagements occurred it seems Trump supporters were pretty excited.

NewsWhip looked at the top Facebook pages that mentioned Trump, Clinton, Hillary and/or “election” from Oct. 31 to Nov. 7.

Again, there are plenty of reasons for a Clinton backer to look at or share a Facebook item from Breitbart. But likely, most of those engagements were by supporters of the candidates those sites mainly seem to serve. .

NewsWhip followed up with another election-related blog today. “ It goes without saying that this election was a social news phenomenon,” Corcoran begins.

“As we noted earlier in the week, media distribution was unlike other elections, simply for the number of US (and global) adults that now use Facebook as a news source. Analysis of exit polls, state declarations, candidate statements and electoral breakdowns were all shared and accessed through Facebook, and we’ve recorded huge engagement numbers in [NewsWhip’s dashboard) Spike since Tuesday.”

First, NewsWhip determined the biggest publishers on Facebook on Nov. 8-9 (election day and the day after) and then calculated the average engagements. The winner was the right-wing Independent Journal Review with 7,800 engagements for 78 election-related stories it produced over that 48 hour period, nearly twice as many engagement-rich stories as The New York Times, which was second with 4,402 average engagements per story.

NBC News and Fox News were last among the top 10 in the averages, “large networks that produced a lot of content over the two days, some of which went viral, and much of which seems to have been lost in the whirlwind of content audiences were exposed to,” NewsWhip concludes. In fact, though, over those two days, NBC News was tops election-related engagement on Facebook, with 1.4 million engagements. 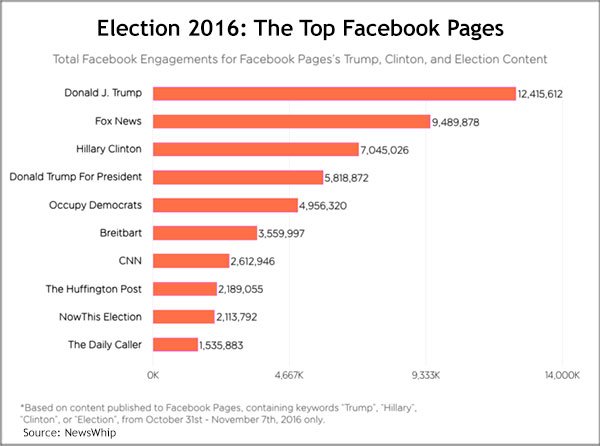