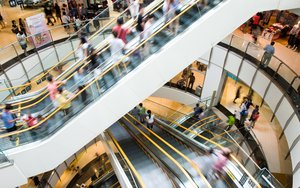 The National Retail Federation says it expects 137.4 million people to go shopping during the Thanksgiving holiday, with Black Friday the weekend’s busiest day. That amounts to 59% of the population, up a tiny bit from last year’s 58.7%.

And Black Friday will remain the weekend’s busiest day, with 74% of those who plan to shop braving the crowds, even with last year. (ShopperTrak has already predicted that Black Friday will be the biggest shopping day of the year, closely followed by December 26 and December 23.)

In a survey done with Prosper Insights & Analytics, the NRF includes both in-store and online shopping in its results, based on a survey of some 7,200 adults. But when it comes to actually storming the malls, Foursquare is predicting a bit of decline, with the location intelligence company estimating that foot traffic will fall 3.5% from last year’s levels.

Despite pushback from some large retailers closing on Thanksgiving to give employees time with family, including such shopping centers as Mall of America, 21% of those who intend to shop next weekend say they will do so on Thanksgiving Day, while 47% plan to shop on Saturday. Of the Saturday shoppers, 24% say they are doing so to support local retailers, as part of the Small Business Saturday campaign.

Foursquare, meanwhile, which bases its forecast on trends over the last two months as well as prior years, predicts that big-box and dollar stores will be among the biggest winners, “outpacing retail in general and to see an increase of over 5% year-over-year,” writes CEO Jeff Glueck in its report. (The company tracks the footprints of some 50 million monthly users from the Foursquare City Guide and Foursquare Swarm Web site and app.)

He expects Big Lots to have the largest gain in the big-box category, with Dollar Tree leading in the discount category, and says those gains are likely to intensify Christmas gets closer.

And while he expects department stores to do worse this year, recent trends indicate that Marshalls, Dillard’s and Macy’s are likely to see increased activity, with Lord & Taylor, Saks Fifth Avenue and Neiman Marcus leading in the luxury segment. “All six of these brands have seen stronger foot traffic patterns than their competitors in the past two months,” he writes, “and should anticipate strong year-over-year performance.”