Millennials And Gen Z Are The Hispanic Market

There is a big reason why marketers have spent the last five years obsessed with Millennials — the numbers. Millennials total 75.4 million and have overtaken Baby Boomers as America’s largest generation. The business community is also starting to pay attention to the next generation, Gen Z. This group of people under the age of 20 is already almost as large as Millennials. Millennials and Gen Z combine to make up more than 50% of the entire U.S. population. The future is now.

The youth movement is even more dramatic in the Hispanic market, where most of the U.S. economic growth is these days. Millennials make up 29% of the Hispanic population while Gen Z makes up 36%. 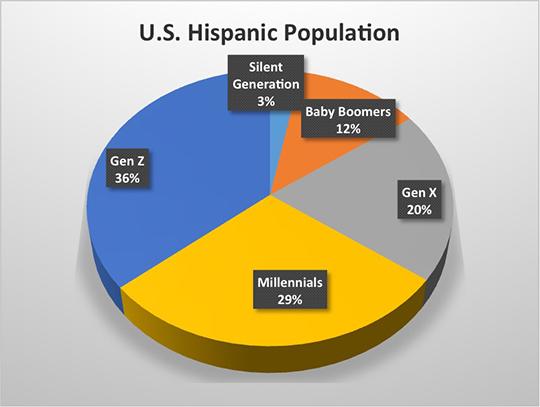 Combined, Millennials and Gen Z make up a whopping 65% of the U.S. Hispanic population.

Most Hispanic marketing, however, is still focused on the 35% of older Hispanics and their Spanish language media consumption. A quick look at the recently published 2016 AdAge Hispanic Fact Pack proves this:

While Millennials do watch Spanish TV, we know from our research that it is only a small part of their overall TV consumption – less than 1/3 of their average 15 hours of TV viewership per week. We also know that Hispanic Millennials and Gen Z spend most of their time consuming digital media. According to Simmons Connect (Spring 2016), digital makes up almost half – 47.3% – of Hispanic millennial media consumption on a weekly basis, or 45 hours per week! Yet almost 80% of Hispanic media spending goes to Spanish TV?

This is just one example of how marketers are not focusing their Hispanic efforts on Millennials and Gen Zers. Another example is the way many brands are implementing a Total Market Approach as was on display at last month’s ANA Multicultural Marketing conference. As I discussed in my last post, the Total Market Approach employed by most brands is not relevant to Hispanic Gen Z.

The only progress is on the creative side, where the top awarded creative in the Hispanic ad business was in English (as highlighted in the 2016 Fact Pack). But the top awarded spots were not major ads run on major media. These were showpieces.

The business of Hispanic marketing must radically change if it hopes to stay relevant in the next five to 10 years. This means:

It’s no wonder the industry is shrinking while the Hispanic population is exploding.

2 comments about "Millennials And Gen Z Are The Hispanic Market".
Check to receive email when comments are posted.
Read more comments >
Next story loading