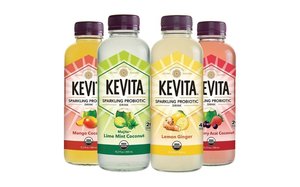 After several weeks of rumors, PepsiCo has announced that it is acquiring KeVita, an Oxnard, California-based maker of fermented probiotic and kombucha beverages.

PepsiCo has owned a minority interest in KeVita since 2013. Terms of the deal were not disclosed. Last month, Reuters reported that the company could be valued at near $500 million, but Fortune today put the actual price in the $200 million range.

The acquisition is another move by PepsiCo to expand its healthier beverage offerings and decrease its reliance on the declining carbonated beverages sector. In October 2015, while speaking to investors, PepsiCo CEO Indra Nooyi stressed the importance of healthier snacks and beverages and actually characterized carbonated beverages as “a thing of the past,” reported the Associated Press.

In addition to snacks, PepsiCo has been focused on fast-growing beverage categories including bottled water — which is expected to surpass carbonated drinks as America’s largest beverage category, by volume, within a year or two — and ready-to-drink teas.

In the juice category, where all but super-premium offerings, such as raw/pressed varieties, have also been flagging, PepsiCo in September announced the first probiotic line from a mainstream juice brand, Tropicana Essentials Probiotics.

KeVita markets more than two dozen flavors of Sparkling Probiotic Drink, Master Brew Kombucha and Apple Cider Vinegar Tonic. All of the beverages contain probiotics and are certified organic, non-GMO, gluten-free and vegan. Many are also low-calorie, and sweetened with stevia.

U.S sales of functional beverages rose from $12.4 billion to $18.6 billion between 2006 and 2015, according to Statista. And while dairy-based probiotic beverages have dominated, the popularity and sales of non-dairy probiotic varieties such as those produced by KeVita — as well as other new options like plant-based waters — are growing rapidly.

Launched in 2009, KeVita is currently distributed in about 20,000 North American retail locations, according to the companies.

PepsiCo intends to use its distribution and marketing capabilities to “extend KeVita’s trend-forward beverages to a broader audience,” said KeVita CEO and co-founder Bill Moses.

However, PepsiCo said that KeVita will continue to operate independently, from its current production and bottling facilities. The companies reportedly expect regulatory approval and finalization of the acquisition within a few months.