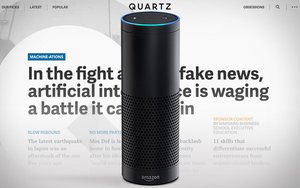 Quartz is bringing its "Daily Brief" newsletter to Amazon Echo, a voice-controlled speaker.

Alexa is most commonly used for daily tasks, such as updating users’ calendars, dimming the lights or playing music. But in March,The Washington Post (owned by Amazon CEO Jeff Bezos) produced a daily political news brief focusing on the presidential election, written by Chris Cillizza, founder of “The Fix,” a daily political weblog for the Post’s Web site.

A Quartz spokesperson told Publishers Daily that the Daily Brief’s integration with Amazon Echo is an expansion to a new digital platform. It allows the publisher to reach Quartz readers in a new way, as well as secure a “tech-savvy” audience interested in business.

According to a Ipsos Global Business Influencers survey, Quartz ranks No. 1 for CEOs and young, ambitious C-suite executives in comparison with The Wall Street Journal, Financial Times, Bloomberg, Forbes and The New York Times, among others.

Last week, Allrecipes partnered with Amazon to create a cooking skill for Alexa. The Amazon Echo can now be used to guide home cooks through more than 60,000 recipes, as well as create to-do and shopping lists.

Users can also control the pace of their cooking by telling Alexa to pause, next, repeat, skip or move forward.

Based on Allrecipes’ 2015 Smart Kitchen Technologies survey, millennial cooks are the most likely to buy connected kitchen technologies and three of five millennial cooks demonstrated an interest in voice-controlled devices that can recommend recipes based on ingredients they have on-hand.