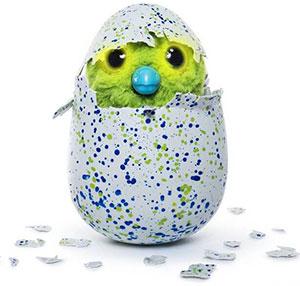 It’s the Christmas curse of retailers—a toy so hot they can’t keep it in stock, sending exasperated parents back out into the streets (or to Craigslist) to find it. This year’s torment is called Hatchimals. Priced between $50 and $60, the cute furry things hatch from eggs as you rub them. And Toys R Us, Walmart and Target are all looking for ways to lure shoppers in to find these almost always out-of-stock critters.

Toys R Us has just kicked off a “12 Days of Christmas” Hatchimal sweepstakes, including gift card prizes. Target is promising to bring “dozens,” (which sounds like a lot less than “thousands”) to stores around the country. It’s also selling Hatchimal-themed gift cards for parents who are willing just to give up and tell the kid to wait until January. And Walmart, too, is promising to restock stores systematically when it can. While the regularly priced toy is currently unavailable online, both Amazon and Walmart are selling the gift from third-party vendors, usually priced at $200 or more.

Toys, as well as prestige fragrances, are among the strongest categories so far this season, reports the NPD Group, and are the only sectors that beat their Thanksgiving week sales of last year by 3%.

But overall, spending seems a little weaker. NPD says that total dollar sales in the fourth week of the 2016 holiday season, including Thanksgiving and Black Friday, were 1% lower than the same week last year. And for the first four weeks of the season, sales are off 3%.

Online sales, though, are spicy-hot, and up 14% compared with last year. In the week beginning with Cyber Monday, sales from desktop computers increased 13% to $11 billion, marking a first: A full Monday through Sunday week with all seven days topping $1 billion. Strung together with Thanksgiving week, it adds up to 11 $1 billion days in a row.