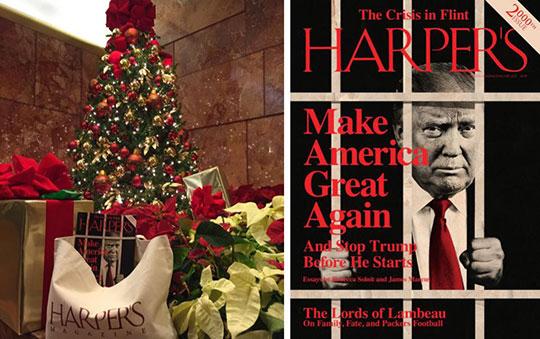 In one of the most aggressive cover story treatments of the President-elect yet, the January 2017 issue of Harper’s depicts Donald Trump behind bars and features the cover lines: “Make America Great Again And Stop Trump Before He Starts.”

The digital edition is available today, but at least one hard copy was on display, peeking out of a Harper’s magazine bag, tucked underneath a Christmas tree with other presents in the lobby of Trump Tower.

The "present" was left under the tree by Harper's staffers at 2:29 p.m. Thursday.

"I'm awaiting word on how long it remained," confided a Harper's spokesperson, adding: "I asked them to set a timer."

Later, she confirmed that "it remained for about as long as it took to take the photo. But they left some on a table at Trump Grill."