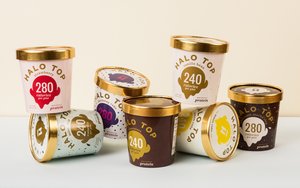 In case you had any doubt, foods and beverages that are “simple” — meaning free of basically everything — are still hot (even if they’re cold), confirms search data released by the online order, home delivery service Instacart. And yes, foods allowable on paleo diets are also still very popular.

For this first food trends report, Instacart looked at year-over-year (2016 versus 2015) changes in the popularity of various search terms, based on millions of searches by consumers in the 18 states in which it operates.

While the triple-digit percentage gains cited don’t provide a lot of context, and don’t directly speak to actual sales, the results do underline key product trends that are highly likely to spill into the New Year.

The product showing the biggest YOY leap in searches (up 919%) was Halo Top, an “all-natural, healthy,” lower-calorie and fat alternative to ice cream.

The others in the top five: New Barn almond-milk products (up 737%); “simple” ingredients-touting Rxbar snacks (up 716%); Simple Mills baking mixes — which are gluten-, soy- and gum-free, non-GMO and paleo-friendly (up 634%); and low-carb, gluten-free, high-protein Harvest Snaps (up 509%).

Instacart predicts thatdairy-free products will be bigger than ever in  2017. Trending items are likely to include nut-based yogurts, like Forager Cashew Yogurt, and vegan cheese, being popularized by Daiya, says the company.

General searches for anything “gluten-free” were among the top 2016 trends, and hot GF brands included Banza chickpea pasta and Cappello’s pasta, pizza and cookie dough. Instacart predicts that the greater availability of GF ingredients likealmond and flaxseed flour, and baking mixes like those from Simple Mills, will feed this trend in 2017.

Instacart predicts that a growing number ofbrands will seek to qualify for the “Whole 30 Approved” label, following in the footsteps of brands like Fatworks Oils and Naked Bacon.