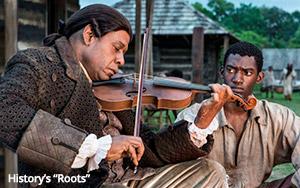 At the risk of producing a shorter-than-usual TV blog, here is a look at the shows that emerged as the very best of 2016.

Two of the best were dramatizations of slavery. History Channel's remake of “Roots,” one of the most revered made-for-TV productions of all time, proved to be worth the effort and the risk.

It told essentially the same story as the original -- the capture and selling into bondage of the young African tribesman Kunta Kinte. But it was produced with the filmmaking technology of today, and without the same content restraints that the original had to abide by.

Moreover, this new “Roots” -- and TV's other top-drawer slavery drama in 2016, WGN America’s “Underground” -- were made after the release of “12 Years a Slave” in 2013. The movie’s frank depiction of the horrors of slavery raised the bar for re-creating the pre-Civil War slavery era in movies and TV shows, and both “Roots” and “Underground” benefited from it. “Underground” will be back for a second season in 2017.

A handful of other drama series emerged as very pleasant surprises too. The TV Blog loved Nick Nolte's performance as an ex-president of the United States in “Graves” on Epix. A lot of other people liked it too, and it will be back for a second season next year.

“The Night Manager” on AMC was also one of the year's high points. So were AMC's "Preacher," OWN's "Greenleaf," Syfy's "Incorporated" and ABC's "Madoff."

As for “The People Vs. O.J. Simpson: American Crime Story” on FX, the TV Blog has no problem climbing on this bandwagon. This was a top-flight production from top to bottom.

Despite what the TV Blog pointed out yesterday -- that the pans far outpaced the picks in the reviews that were posted here in 2016 -- there are, nevertheless, a handful of network TV shows on the year's “best” list.

Who can forget the review posted here in October that raved about the new Joel McHale sitcom on CBS, “The Great Indoors,” which came in for high praise for its merciless abuse of clueless Millennials?

Other network shows that came in for rave reviews this year included Fox's “Lucifer,” about a suave, handsome emissary of Satan; and “Shades of Blue,” the NBC drama starring Jennifer Lopez and Ray Liotta.

The thumbs-up reviews of these two shows demonstrate that the TV Blog is nothing if not open-minded in the consideration of new TV shows to review.

Or to put it another way: Jennifer Lopez as a tough New York police detective? I was as skeptical as anyone else, but the darned thing worked. Go figure.

One show I neglected to review when it premiered last month was “Leah Remini: Scientology and the Aftermath,” the “King of Queens” actress's blistering takedown of Scientology. This eight-episode, limited series has been sensational.

Also worth mentioning from the world of reality television is “Jay Leno's Garage” on CNBC. Now in its second season, this show really came into its own this year. It makes its subject -- cars -- into something interesting for everyone, not just car buffs. The fact is, Jay Leno might be a genius.

Last but definitely not least, we said good-bye to “Downton Abbey.” What can one say about this show that hasn't already been said about it here and elsewhere? With nothing new to add, the TV Blog will settle for reiterating the painfully obvious: This show occupies a special place in TV history.

Will we ever see anything like it ever again? At this time of year, the TV Blog likes to be optimistic. So on this question, the answer is: Never say never.