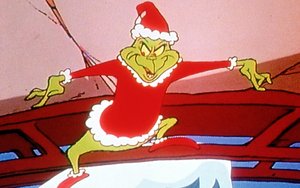 “ ‘Twas the night before Christmas, when all through the house, not a creature was stirring” … except for two hours of murder on CBS and Ultimate Fighting on Fox!

Your children might be nestled snug in their beds this Christmas Eve, but you can forget about visions of sugar plums dancing in their heads.

Instead, they’re more likely to be dreaming of a bloody Christmas if they happen to come upon the prime-time lineups on CBS and Fox this Saturday night. And on the first night of Hanukkah, too!

What is the world coming to? Well, it’s come to this: CBS has scheduled two hours of its true-crime show “48 Hours” from 9 p.m. to 11 p.m. Eastern – billed in a press release as a “Saturday Night Double Feature.” Yes, it should be noted that Saturday night is the usual evening for “48 Hours,” which in the true-crime genre is one of the best shows of its kind.

But on Christmas Eve? At least neither of these two one-hour crime stories took place on Christmas. That kind of a tie-in would have been really distasteful.

Meanwhile, Fox will usher in this sacred Christian holiday commemorating the birth of Jesus with a “special presentation” of a UFC (Ultimate Fighting Championship) event that took place Dec. 10 in Toronto. The event, titled “UFC 206,” was available on pay-per-view.

“Saturday’s presentation is the first time ever for a fight card to re-air on broadcast television just two weeks after its live premiere,” bragged a press release from Fox Sports about this very special bare-knuckle fighting event airing on Christmas Eve.

Many people might consider such a spectacle to be out-of-sync with the season of “Silent Night,” but not Fox. On the contrary, Fox considers this Christmas Eve programming choice to be a “gift” to its viewers.

“FOX GIVES VIEWERS THE GIFT OF MORE UFC WITH UFC 206 SPECIAL PRESENTATION ON CHRISTMAS EVE,” blares the headline, in all caps, on the Fox Sports press release. Thanks, Fox. What happened? Did you run out of lumps of coal?

As the schedules over on ABC and NBC demonstrate, it is not difficult for a major TV network to schedule something more appropriate for Christmas Eve than the crime shows on CBS (one of which concerns the sickening 1990 murder of a husband and wife in a basement in Winnetka, Il, while they begged for their lives) and two hours of two-fisted punching, kicking, scratching and biting on Fox.

NBC will have an encore showing of “It’s a Wonderful Life” taking up all three hours of prime time on Christmas Eve. ABC starts the evening off at 8 Eastern with two new half-hour animated Christmas specials from Disney.

According to a description on ABC.com, these shows made especially for kids have to do with Santa’s elves, who to my knowledge will not be seen attempting to gouge out anybody’s eyes or bite off anyone’s ears.

At 9, ABC plans a rebroadcast of a wholesome two-hour special it first aired last month, “CMA [Country Music Association] Country Christmas,” in which country-music stars sing Christmas songs. See? That wasn’t hard to schedule, was it?

The good news is that the murder shows on CBS and the gloves-off fisticuffs on Fox are easy to avoid. Among other things, you can watch Christmas movies such as “Elf” (possibly the most charming Christmas movie of all time) on Freeform, and “A Christmas Story,” which will be marathoned, as usual, on TBS.

Still, with two of our biggest networks scheduling murder shows and mixed martial arts bouts on Christmas Eve, we have certainly come a long way from “A Visit From St. Nicholas.”
tv
Next story loading