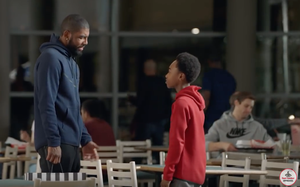 Much as the NFL “owns” Thanksgiving and college football “owns” New Year’s Eve and New Year’s Day, the NBA is doing its best to “own” Christmas.

This year marks the 14th season the NBA will have five nationally televised Xmas games — three on ESPN and two on sibling ABC, with tip-offs running from noon to 10:30 p.m. (ET).

The NBA said it had strong Xmas ratings last season, including 11 million viewers who saw the Cleveland Cavaliers play the Golden State Warriors, “the most-watched Christmas game in four years.”

On Sunday, with another Xmas rematch between LeBron James’ Cavaliers and Stephen Curry’s Warriors, plus such stars as Dwyane Wade, Carmelo Anthony and Russell Westbrook running on the court, NBA partners including JBL’s Harman Audio, Kia, State Farm, Spalding and Foot Locker will be running campaigns on-air and via other activations.

• Harman will break a spot featuring Curry, part of a larger Christmas Day effort including JBL sponsorship of each halftime show, an NBA.com homepage takeover and “extensive social presence.”

• State Farm will break a commercial under its new “Combinations” campaign, which features Chris Paul, DeAndre Jordan and Damian Lillard.

• 20th Century Fox will air three new commercials for “Hidden Figures” — its Xmas day release telling the story of three female African-American NASA employees who overcame challenges in 1962 to become key members of the team that enabled John Glenn to become the first American to orbit the Earth — with the spots to star NBA players Tyson Chandler, Paul Pierce, Deron Williams and their daughters.

• Kyrie Irving of the Cavaliers will appear in two separate campaigns, one a generic humorous spot for Kids Foot Locker, another for Nike touting the release of his Kyrie 3 signature shoe.

• Kia will continue its season-long “Kia Who Ya Got” sweepstakes asking fans to predict via @NBA Instagram and Twitter accounts which teams will win.

The NBA itself will also be in on the action.

Voting for the February NBA All-Star Game presented by Verizon will launch on Christmas, supported on-air and across NBA digital assets.

The NBA’s “The Most Dunktastic Time of the Year,” campaign, which broke this week starring a bevy of players, will continue.

For fashion-conscious viewers, all players on Christmas will wear Adidas Xmas uniforms and Stance socks designed for the occasion, to be promoted on NBA social and digital platforms.

Nike athletes including James, Irving and Kevin Durant will wear special holiday kicks, as will Adidas athletes. Under Armour spokesman Curry will lace up his Xmas-themed Curry 3. Various activations will support the retail release of the respective shoes.

And if just watching hoops on TV is too static, the league on Thursday launched NBA InPlay, a real-time interactive fantasy game via FanDuel and presented by Autotrader, which allows people watching nationally televised NBA games to play against each other. The free app (available via the iOS App Store and Google Play) will be active during the Xmas games, supported by a multi-media effort.

"We are always looking at ways to enhance the viewing experience, drive people to tune in to our broadcasts and increase the time spent watching live games," Melissa Rosenthal Brenner, the NBA's senior vice president for digital media, said in a statement. "NBA InPlay has the potential to meet these objectives while offering our fans an engaging, new way to experience the game."