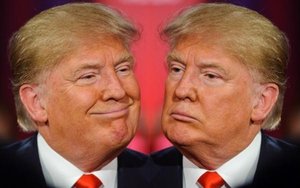 If the ongoing presidential campaign was this year's dominant TV show -- which it was -- then the year's top TV star was Donald Trump.

Certainly, The Donald had a bevy of co-stars and supporting cast members, but none of them -- not even Hillary Clinton -- were his equal when it came to commanding attention on television.

In fact, for virtually all of the Republican contenders for the GOP nomination and the eventual Democratic nominee, a great deal of the attention they did receive was largely due to Trump.

Many people might feel in retrospect that the also-rans might have seized a lot more of the limelight if it had not been for Trump grabbing the lion’s share of it.

But it's also possible to come to the opposite conclusion -- that Trump's media magnetism had a trickle-down effect, drawing more attention to the other hopefuls than many of them might have received going up against a more banal frontrunner.

In short, the appeal of this “show” stemmed almost entirely from Trump's presence in it. As for his “performance,” his ability to steer the spotlight -- i.e., the media's cameras and microphones -- toward himself was not so masterful as it was natural.

Much of it seemed unintentional. It didn't seem like a pre-planned strategy. It was just Trump being Trump -- speaking his mind, not being concerned about whether or not the statements he was uttering were entirely true (if at all), and definitely not caring whose nose he bent out of shape on any given day.

For better or worse, this is the stuff that draws the attention of the news media -- the potential for gaffes or controversy or conflict. What surprised everyone (everyone, that is, except Trump, his team and all the people who voted for him) was that none of the gaffes, controversies or conflicts were detrimental to his campaign. He won in spite of them, and because of them too.

This year's blogs on the presidential campaign included eight on the Republican and Democratic national conventions (four each), previews and reviews of all of the debates (of which there were many), and various columns on aspects of the media's role in the whole mess.

Much has been made of Trump's social media use during the campaign year too -- particularly his evident addiction to Twitter. You get the impression that as soon as Trump realized one day that there was this thing -- Twitter -- that you could use to talk directly to people in brief words and phrases that were not too taxing to compose, then his love affair with Twitter was made.

But as much as he loves Twitter, dominating TV is really what he likes most. He's a 70-year-old man. And men of his generation still believe in the power of television -- even if he's the rare 70-year-old who has formed a Twitter habit.

During the campaign year, much was made of the attention Trump gave to TV -- watching the news shows, appearing on them often (either in person or by phone), and then noting the ratings for the shows on which he appeared.

Never mind that his boasts of ratings triumphs and increases for the shows that booked him were often exaggerated or false. Old habits die hard: He used to brag this way about ratings for “The Apprentice,” declaring that the show was No. 1, or beat everyone, when neither was true for the most part.

The Trump TV show is not over, of course -- not by any stretch of the imagination. For all we know, Trump’s campaign, which began in June 2015, was just a preliminary to the main event. That would be the Trump administration itself, “premiering” on Jan. 20.

As a TV show, expect this new chapter in the Trump saga -- whether tragic or comic -- to be every bit as attention-grabbing as this year’s was.