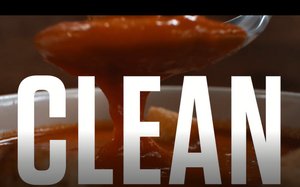 In 2014, Panera Bread made a public promise that all items on its restaurant menu and in its packaged grocery products would be free of all artificial ingredients by the start of 2017.

The company — which began publicly documenting its journey 18 months ago, with the introduction of its brand-manifesto, umbrella campaign “Food As It Should Be” — is now launching an extension touting that it has officially met that “100% clean” goal.

The latest work from Panera’s creative agency of record, Anomoly, includes a new TV ad/video, in 15- and 30-second versions, that begins airing Jan. 9.

Like the brand’s “Clean Food” ad released six months ago, which has pulled nearly 1.5 million views on the brand’s YouTube channel to date, the new video (below) starts with images and messaging challenging food that is processed and full of artificial ingredients (“Today, it seems like all we know for certain is that we don’t always know what we’re eating”), and follows with Panera’s clean differentiator. In the new ad, the message has been updated to spotlight the mission accomplished element: “That’s why at Panera, 100% of our food is 100% clean…”

With “Food As It Should Be” and its various extensions, Panera — which led the casual/fast-casual category in 2016’s Brand Keys Customer Loyalty Engagement Index (CLEI) — is offering “an excellent and fairly uncommon example of relevant, effective, emotional advertising” that reinforces its brand values, observed Brand Keys president Robert Passikoff.

In recent times and going forward, earned media are being given a more important place in Panera’s strategic mix, Chris Hollander, the company’s head of marketing, tells Marketing Daily. For instance, a successful campaign launched in late August 2016, which focused on the clean ingredients in Panera’s kids’ menu items, used dieticians and mommy bloggers. That campaign’s social component is ongoing.

Panera also will be using more social and mobile, and less television in the year ahead, Hollander reports.

But none of that means that the brand, which uses Maxus as its media agency, will decrease overall marketing spending. In fact, Panera, which pegs marketing increases to a percentage of sales growth, has bumped up the marketing budget for the year by about $10 million to roughly $100 million, the company confirms.

That reflects Panera’s strong financial results, even as the restaurant industry as a whole struggles against declining traffic and sluggish revenue growth. In its latest fiscal quarter, ended September 2016, net income dipped 1%, but total revenue rose 3%, company-owned restaurant comp-store sales rose 3.4%, and earnings rose 8% (to EPS of $1.37). Revenue and earnings beat analysts’ expectations, and the company raised its full-year guidance.

Panera’s leadership in clean food and transparency, and its marketing strength, while critical, are by no means the only factors driving its momentum.

Years ago, the brand “foresaw the forces reshaping the restaurant industry and conceived a strategic plan to capitalize on them,” founder, chairman and CEO Ron Shaich said in his Q3 message. “We built Panera 2.0, a comprehensive guest experience platform enabled by digital…we accelerated our growth of catering, delivery, Rapid Pick-Up and Panera at Home…we enabled innovation in food, marketing, operations and design…we recognized the power of loyalty and created a program that is now the industry’s largest and arguably most impactful.”

Hollander — who is the first to stress that the Panera brand’s values and consumer-led overall strategy “is kind of a marketer’s dream” — won’t discuss campaign performance specifics, but confirms that the “Food As It Should Be” executions to date have generated solid results across a variety of KPIs, including brand health.

More new creative spotlighting other Panera messaging and initiatives is ahead in 2017, although Hollander will say only that these will reflect “the next steps in Panera’s journey,” and its commitment to “transparency and offering healthy options.”