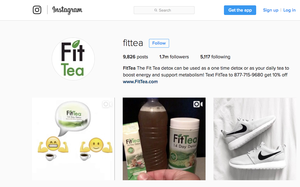 FitTea, which sells tea blends that supposedly offer health benefits, posted paid Instagram endorsements to its own Web site without disclosing that they were ads, according to an industry watchdog.

After the organization began investigating FitTea, the company modified its Web site to include the hashtag "#ad" on the paid Instagram endorsements. FitTea also said it will require paid endorsers to disclose their connection to the company, and will monitor posts to ensure compliance, according to the NAD.

"NAD appreciated the advertiser’s changes to the endorsements and testimonials on its website," the organization said in its opinion.

The NAD also criticized the content of some endorsements -- including ones that claimed that drinking FitTea helped with weight loss. "While the diet and exercise program that FitTea promotes to customers who purchase FitTea might result in weight loss or other weight-related health improvements, there was no evidence in the record that drinking FitTea by itself will boost metabolism, boost immunity, burn fat or otherwise result in weight loss," the NAD wrote. The organization recommended that FitTea stop reposting testimonials with those claims.

In addition to the Instagram posts, FitTea also displayed consumer reviews on its site. The NAD approved of the company's process for posting reviews. FitTea uses a third party to contact customers and solicit reviews, then posts all reviews in unedited form; that procedure supports the conclusion that the posted reviews are "authentic and representative of reviews of the product from all purchasers from the FitTea website," according to the watchdog.

But the NAD found it problematic that FitTea posted the authentic consumer reviews next to the paid endorsements. "It is important for consumers to be able to distinguish between independent reviews and testimonials or endorsements used as advertising for a product," the organization wrote. "As a result, NAD advised the advertiser to separate its endorsements and testimonials from its product reviews as well as to prominently disclose that the reviews on its website are authentic user reviews."