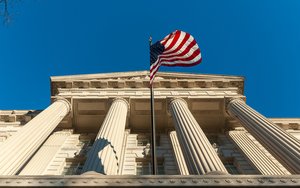 The government aims to be one of the leading IoT consumers and enable growth with a new set of principles designed to help it do so.

In a new report, the U.S. Department of Commerce outlines a set of principles that will be used to guide its IoT initiatives.

The general plan is to enable widespread advancement and adoption of IoT products and services, according to Penny Pritzker, secretary of the U.S. Department of Commerce

“The Internet of Things promises to revolutionize our world from increasing efficiency and convenience for industry, consumers, and government to improving safety,” Pritzker said in a statement.

In addition to enabling the foundations and platforms for others to build upon, such as access to infrastructure and creating new policy, the Department of Commerce seems to be interested in actively exploring and implementing IoT capabilities itself.

One of the guiding principles includes acting as a leading IoT consumer, along with the government as a whole, to quantify, measure and understand the impact of the capabilities.

Adopting IoT capabilities will help them learn and solve potential workforce issues created by the Internet of Things, according to the Department of Commerce.

Standardization is also included in the principles, which has been an area of focus for other government agencies, alliances and brands involved in IoT products and services.

However, the Department of Commerce plans only to advocate for ‘industry-led, consensus-based, international’ standards, not develop them.

Here are the Department of Commerce’s guiding principles: