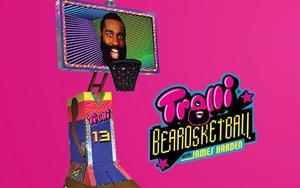 This time, the marketing team will set up an interactive digital backboard on the concourse of Houston’s Toyota Center during the January 20 game between the Rockets and the Golden State Warriors.

Fans at the game will be able to try their skill at “Beardsketball”: shooting balls at a hoop attached below Harden’s beard in a giant digital screen image of his face (shown above). As each ball is shot, the digital Harden will taunt, challenge or praise the player, providing a sort of one-on-one experience with the NBA star.

Beardsketball players will be asked to wear Snapchat Spectacles to allow other Trolli and Harden fans who can’t be at the game to watch all of the evening’s action on Trolli’s Snapchat account (Trolli_USA).

In addition, Harden himself will don the spectacles at times, so that fans can get a Harden’s-eye-view. Trolli fans in the stands will be easy to spot: They’ll be wearing pink beards and Trolli-branded sunglasses, and consuming large quantities of the candy.

All fans will also be able to send taunts from Harden to their friends via an online “smack-talk” experience. And those who share photos of themselves on social will have a chance to win a volume of Trolli candy equivalent to the weight of the Rockets’ mascot, Clutch the Bear.

The Beardsketball experience will also be offered in other locations in the months ahead.