The Magic Of Donald Trump 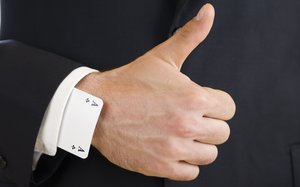 On the morning of his inauguration, I can't help but reflect on how magical Donald J. Trump truly is. And by that I don't mean how he has cast a spell over many Americans, but how he has demonstrated his mastery of what many consider to be the true secret of magic: the art of misdirection.

I have admired Trump's skills for some time, but it wasn't until I got to observe some of the most accomplished masters of the art perform up close that I truly appreciated it.

Like Trump, a big part of their magic is simply their performance skills. All great magicians are great entertainers and showmen. And that is an important part of their craft, because it sucks us into a mental state where we are open to being mystified -- often by their banter, which redirects us from something they don’t want us to see.

"The central secret of conjuring...is a manipulation of interest,” Henry Hay explains in The Amateur Magicians Handbook.

The manipulation of interest can be achieved physically by gestures, body movements and a variety of other physical means or via a magician’s verbal patter that redirects the audience’s attention so that they are focusing on something other than the sleight of hand or other magical technique that creates the actual illusion.

If you want to see the highest art form of this craft, get a member to invite you to the Magic Castle and go to the “close-up” magic room, where the audience observes, mere feet or inches away, the magician making coins or cards appear and disappear, change suit, numbers, colors -- all right before your eyes.

Except they are not happening before your eyes.

They are actually changing not before your eyes, because the magician has used his or her skills to misdirect you in such a way that you are not actually observing what they are doing.

There are different types of magical misdirection -- time-sensitive ones that distract you for a fleeting instant so audiences do not observe a physical technique, and another type that is not time-sensitive, but reframes the audience's perception so they are not even thinking about what's really going on.

Trump is a master of both these techniques. I am not knowledgeable enough about the way magic actually works to explain how he does it, but I can sometimes detect where he is doing it, especially in his showmanship and in the way he uses media.

Like any great magician, he has perfected his patter to misdirect our attention from what he is really doing so he can perform some sleight of hand, but also so he can reframe our perception about what's really going on.

The best examples I can cite are some of his recent tweets, as well as his recent press conference.

By tweeting things like Meryl Streep being an “overrated actress” or that Congressman and civil rights leader John Lewis is “all talk” and “no action,” he creates an illusion using the media equivalent of smoke and mirrors. It misdirects us from what is really going on — their grounded criticism of Donald Trump — simply by redirecting the audience's attention from himself to the person leveling the criticism.

It's a brilliant technique. It works by getting the media to shift their attention from Trump long enough that the audience's attention is now thinking about the credibility of the the critic, not Trump.

The other, non-time-sensitive technique is the way Trump reframes the audience's attention by a combination of patter and confusion that have literally altered the reality of the facts.

He did this in his primary campaign by labeling opponents as “low energy” or redirecting the audience's attention to other less-than-relevant facts, like their physical appearances. He did it in the general election by labeling his opponent as “crooked.” It was magical. And it worked, because he redirected enough of the audience's attention that they didn't see what he was really doing.

The most magical way Trump is performing his art may be the way he is reframing the way we perceive the role of the media.

By labeling real media like CNN “fake news” or The New York Times as a “failing” news organization, using sleight of hand to replace them with actual fake news organizations, he may pull off his greatest trick of all: marginalizing or removing the only thing that can redirect his audience's attention to what he is actually doing.