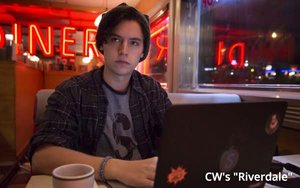 It really is a sign of the times: A TV network makes a live-action series based on the old Archie comics and instead of a wholesome show somewhat akin to the tone of the comic books, you get a “Riverdale” that’s more like “Twin Peaks.” There’s even a cast member from the original “Twin Peaks” -- Madchen Amick -- who plays an unhinged mom with an axe to grind (not literally) in “Riverdale.”

Premiering on Thursday, “Riverdale” is the long-awaited CW “reboot” of the Archie comics. Beware the word “reboot” -- it often indicates a wholesale remake of something that resembles the original source material you remember in name only.

In this show, the names will be familiar -- but only to those of us old enough to have actually read an Archie comic. They’re all here in “Riverdale,” however. Amick plays the mother of one of them -- straitlaced Betty Cooper, the blonde, proverbial girl next door, who lives next door to Archie Andrews.

They have grown up together and they are platonic friends, although Betty would like to be more than that. Red-headed Archie is a jock with a sensitive side (he writes his own songs). His parents are divorced and his mother lives somewhere else. Archie lives with his now-single father -- played by Luke Perry -- who owns a construction company.

There is a dark-haired Veronica, who moves to Riverdale from New York City in the premiere episode, following a public scandal in which her father, a financier, has been indicted for fraud. The result is that Veronica and her mother are no longer rich -- at least, not as rich as before.

There’s a Reggie, who in this show is an arrogant jock. In a nod to the necessity for diversity in all TV communities, the new Reggie happens to be Asian-American. Thankfully, there is a Jughead (pictured above). He’s a night owl and a bit of a loner who serves as chronicler and narrator of the new “Riverdale” and all its denizens.

There’s a gay male character not seen in the Archie comics (at least not in the ones that I last saw -- which was back in the 1970s). Perhaps the characters who are the most different in this new version of Archie are the oaf-like jock named “Moose,” who turns out to be gay (but closeted); and the teacher named Miss Grundy.

In the old comics, she was a white-haired spinster with her hair in a bun. Here, she’s Ms. Grundy, a dark-haired, smoldering hottie who has a steamy summer affair with Archie. I told you they changed things up a bit, didn’t I?

In the first episode that I previewed, there was no sign of portly Mr. Weatherbee. Maybe he’ll turn up in a future episode, and let me guess, he’ll be gay too. There’s a Pop Tate, though, proprietor of Pop’s Chock-lit Shop, the teens’ neighborhood hangout.

Like “Twin Peaks,” the overarching storyline (no pun intended) concerns the mysterious murder of a popular teen -- in this case a male high school jock. Murder, a steamy affair with a sexy teacher, an autopsy scene -- these were not featured in the panels of the old Archie comics, at least as I remember them.

The truth is, “Riverdale” is not a bad show for teens, except for its resort to vulgarity that is completely unnecessary.

Later, the gay character reports that Moose has “an appendage” like “a horse.” And the possibility of sex with the red-headed Archie is described by one worldly teen as “riding the ginger stallion.”

With its murder storyline and its sex-with-a-minor subplot (Archie and his friends are mere sophomores, after all), “Riverdale” is not your father’s “Archie.” While it’s not a “nice” show, it could be a better one if the scriptwriters can get their minds out of the gutter.

Don’t hold your breath waiting for that to happen.

tv
1 comment about "Sad Archie And His Angst-Ridden Friends Populate New 'Riverdale'".
Check to receive email when comments are posted.
Next story loading