All Trump All The Time Is Making TV Unwatchable 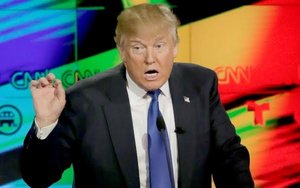 Only 12 days into his presidency, Donald Trump has made TV unbearable.

And on Tuesday night, he means to make it even worse by elbowing his way into prime time to announce his pick for Supreme Court justice. The news channels will carry it, and then discuss it for hours, if not days.

On Tuesday morning, it was unclear to what extent the broadcast networks would preempt or disrupt their Tuesday night lineups to make room for Donald. Maybe that depends on how long the Attention-Getter in Chief intends to keep this show going.

Network programs standing in the line of fire at 8 p.m. Eastern (the time the great statesman decreed via Twitter that he would appear) include “The Middle” on ABC, “NCIS” on CBS and ironically, the game show on NBC known as “The Wall” (it’s not about that wall).

It would be a welcome change of pace if all the networks -- both broadcast and cable -- decided to simply ignore him today, but that’s about as likely as moths suddenly developing a resistance to porch lights.

For the news channels, the 24-hour antics of the Mess-maker in Chief are like manna from heaven. The promotional copy on the Fox News Channel Web site Tuesday morning read like the circus was coming to town.

“His most important decision?!,” read this strangely punctuated blurb for Tuesday night’s 7 p.m. hour on Fox News anchored by Martha MacCallum. “Right before Trump’s Supreme Court choice, Martha [bold-faced by Fox News] looks at how the pick will affect our country’s future.” What? No exclamation point here?

For the 8 p.m. hour, the copy went like this: “President Trump will announce his Supreme Court pick, and Bill [bold theirs] will be LIVE [caps theirs] when it happens. Don’t miss The O’Reilly Factor [this was not only in bold, but in red too].”

OK, fine. You can’t blame a news channel for promoting its shows. But the way Trump is being covered on the news channels is not very different from the way sports is covered and discussed on ESPN and elsewhere -- basically a couple of loudmouths sitting around talking. And talking and talking.

Trump has been so antsy in his first week-plus five days -- like a child sitting in the backseat during a long family road trip -- that the concept of the “slow-news day” has suddenly been chucked out the car window. You can turn on the TV now at any time and find that Trump has just done something you didn’t know about two hours ago.

Monday night, for example, when casually checking out a news channel or local TV newscast, you learned that unbeknownst to you, Trump had just fired an interim attorney general you had never heard of.

Now you suddenly knew all about her and what she had said to get herself canned -- two things you might never have ever learned if not for Trump turning every molehill into a mountain and the TV news apparatus eagerly enabling him to do so.

Trump’s hyperactivity has even infiltrated the weekend. Instead of weekend evening newscasts whose story rundowns customarily reek of desperation, you now have all sorts of photogenic chaos -- mainly, protest marches involving hundreds of thousands of people who ordinarily would be catching up on sleep or household chores on Saturday and Sunday. Instead, all of America now seems stirred up like a giant anthill that has just been kicked by a small boy.

On Monday night (and other nights too), the subject of Trump was inescapable. He and his executive orders were being discussed and reported on all of the news outlets -- 24-hour cable, network evening news, local news at 6, 10 and 11 -- and on the late-night shows where 90% of the monologue jokes are now about Trump.

If TV is a reflection of our society (which it is), then the image we’re seeing in the mirror is unsettling to say the least. Maybe that’s what you get when the president you’ve elected learned everything he felt he ever needed to know by being on television.

politics, tv
8 comments about "All Trump All The Time Is Making TV Unwatchable".
Check to receive email when comments are posted.
Read more comments >
Next story loading