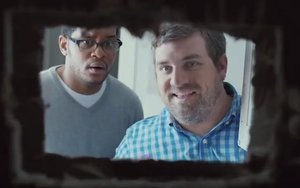 The King’s Hawaiian brand will make its first Super Bowl appearance, with a spot that announces a new product line in addition to touting the appeal of its signature dinner rolls.

The 30-second ad (below) shows dads conspiring about a space behind a kitchen cabinet designed to hide a stash of all-too-popular King’s Hawaiian rolls — only to be thwarted by their kids’ curiosity about a grandfather clock in the adjoining room.

A brief message inserted before the vignette’s “payoff scene” announces that the brand will be debuting a line of BBQ sauces in the spring. The line of Hawaiian-inspired sauces is in the process of being rolled out to retailers across the country.

The ad, set to run in the game’s fourth quarter, is from the Levit Agency and was directed by Mike Bigelow.

The original version of the ad without the BBQ launch announcement first aired on a limited basis — mostly Scripps cable networks — starting on Jan. 9.

Why make the multimillion-dollar (reportedly about $5 million for 30-second ads this time around) Super Bowl exposure? The brand, which also makes buns and other bread products, wanted to reach the largest audience possible with the news about the BBQ sauces, its first non-bread product line, Erick Dickens, VP, marketing, King's Hawaiian, tells Marketing Daily.

While the brand continues to work to increase awareness among all consumers, “this year, we will also begin to reach more male consumer audiences, as we expand into the BBQ sauce category,” Dickens adds.

The sauces will have their own multichannel advertising campaign during 2017, with TV ads airing mostly during Major League Baseball games, he reports.

King's Hawaiian is no stranger to large audiences, Dickens points out. The brand aired ads during the 2015-16 Oscars, and will this year continue its sponsorship of the “Good Morning America” Summer Concert Series, “with some exciting new twists,” he says.