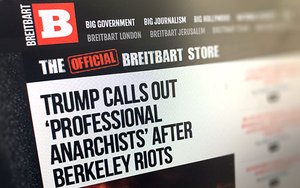 Companies from Lyft to T-Mobile are pulling ads from Breitbart News, the controversial far-right Web site formerly run by Stephen Bannon, joining the list of retailers, consumer brands and even governments following suit.

"One of Lyft's core values is to uplift and support one another in all that we do," Lyft's director of communications Adrian Durbin told CNET. "We strive to ensure that our advertisements appear only on sites that share this value."

According to a report from CNET, a secretive organization called Sleeping Giants is on a mission to shame companies and organizations advertising on Breitbart News.

Bannon, now a top White House adviser, has described Breitbart as a “platform for the alt-right,” a term commonly associated with racism, fascism, anti-Semitism and white supremacy.

“We are trying to stop racist Web sites by stopping their ad dollars. Many companies don't even know it's happening. It's time to tell them,” Sleeping Giants tweeted in November.

Sleeping Giants claims about 820 companies have blacklisted Breitbart, including big consumer brands like Kellogg’s, BMW and Visa, as well as retailer Warby Parker and insurance company Allstate. The list, available on a public Google Doc, continues to be updated.

In addition, Hewlett Packard, Lenovo and Autodesk will no longer advertise on Breitbart.

An HP spokesperson told CNET: "Our vision is to create technology that makes life better for everyone, everywhere, and we have no intention of advertising on sites that don't align with our values as a company."

A Lenovo spokesperson added: "Following a recent article regarding women in science, tech, education and math (STEM), Breitbart has been blocked from all current Lenovo media campaigns.” The rep was likely referring to a controversial story on Breitbart with the headline: “Here’s Why There Ought to Be a Cap on Women Studying Science and Maths.”

Other tech giants, like Uber, Amazon and AT&T, continue to display ads on the site.

Ads generally appear on Web sites through programmatic advertising, an automated process that often leaves marketers unaware of where ads are appearing. Ads are placed based on algorithms that target specific audiences.

Another interesting Breitbart boycotter? The Canadian government, which announced it was pulling Breitbart from its list of nearly 400 sites approved for federal advertising.

The Canadian government found “the content of Breitbart.com did not align with the Government’s Code of Value and Ethics,” a spokesperson with Public Services and Procurement Canada, which oversees media buying for the federal government, told Canadian newspaper The Globe and Mail.

“The Government of Canada does not support advertising on Web sites that are deemed to incite racial hatred, discrimination or the subversion of Canada’s democratic system of government,” the spokesperson continued.

Breitbart editor Alexander Marlow told The Wall Street Journal there has been “little to no impact” on the site’s advertising revenue as a result of the blacklisting. Marlow claims traffic to the site is currently at an all-time high.

Sleeping Giants isn’t the only anonymous activist to fight against Breitbart.

The company has previously suggested plans to expand its content with the launch of a French-language site ahead of France’s 2017 presidential elections, which happens in April.

In response, a 22-year-old known only as Antonin has bought the domain names breitbart.fr, breitbartnews.fr and breitbartnewsnetwork.fr. in an attempt to limit Breitbart’s expansion.

Antonin told The Verge that no one from Breitbart has contacted him about the domains. He added he would not sell them even if he was offered a substantial deal. However, Breitbart could make a URL extension for a French version of the site, as it has for its bureaus in Jerusalem and London, rather than give it a separate domain.

Separately,On Wednesday, University of California at Berkeley students protested an appearance by a BreitbartNews editor, Milo Yiannopoulos. The university canceled the address after violent protests broke out.